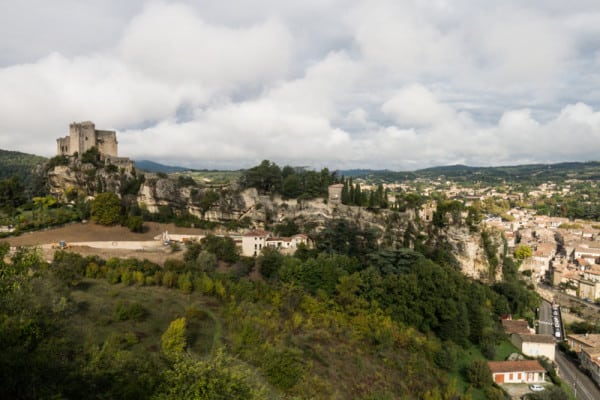 Until a few months ago, I’d never left the United States, unless crossing the Canadian border in a canoe or shopping in Tijuana count.

Kitchens and free time are two words that don’t blend together, and this is more true for me than ever before as I’m the face of the restaurant. Left to my own devices, I would likely never take time off. Thank god I have a girlfriend who had the genius idea for us to go to Provence for a couple weeks.

What we ended up doing is a “walking vacation” If you like to walk/hike, you should definitely check out VBT vacations if you’re going to Europe. Basically you’re with a group of people, along with a few local guides. Every two days you stay in a different town and hotel, most of them beautiful, historic places like Hotel Le Beffroi in Vaison La Romaine. 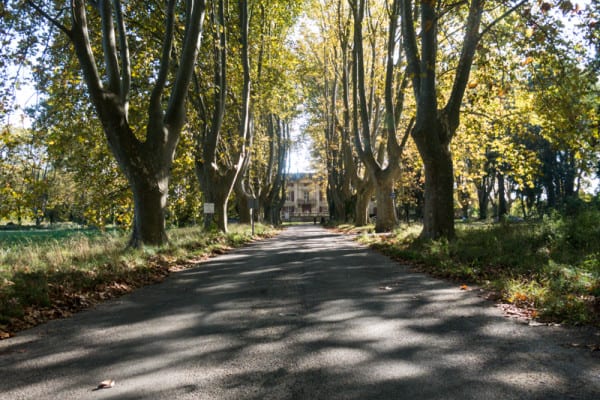 Chateau Roussan, one of the historic Hotels we stayed at in St. Remy de Provence.

The walking part of the trip is really cool, and gives you a nice balance of structured vs. free time. Each day your tour guides give you an itinerary, and you spend a few hours walking through French hiking trails, going from small town to small town. As I knew we were arriving in mushroom season, you can bet I was excited to get to walk through the country side in sunny Provence for a solid week!

One thing that stood out to me right away was that the trails reeked of herbs. Wild rosemary, thyme, and lavender were like weeds in the country side, There were plenty of mushrooms too, on the trail I spotted white chanterelles, and a new one for me: bleeding milkcaps. 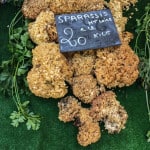 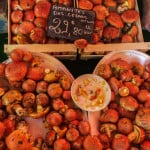 Caesar’s Amanita, generally served with olive oil, lemon and salt. can you see the tasting plate? At the market in Aix-en-Provence. 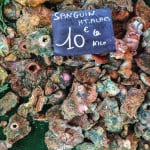 Bleeding Milkcaps at the market in Aix-en-Provence 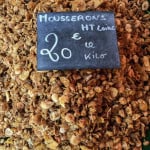 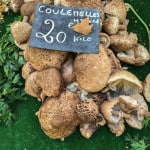 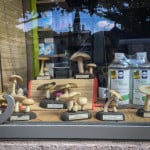 You can bring your mushrooms to a pharmacy in France, and they will identify for you.

The real prize was the market in Aix en Provence though, where 20 lb piles of rare species to me like Caesar’s amanita were a dime a dozen, not to mention ridiculously good cheese, vegetables, and what seemed like endless varieties of cured meat. 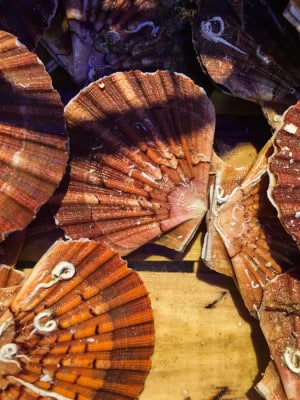 Scallops in their shells, at the fish market in Avignon.

As you can expect, we ate our way through each little town, it seemed like little bakeries with baguettes, ficelles, and traditional fugasse bread were everywhere, as well as small charcuterie/butcher shops and little grocery stores. 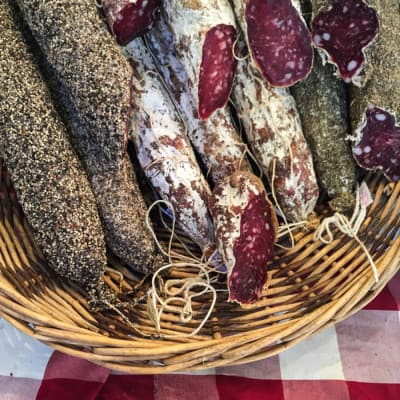 Hands down, my favorite meal of the trip was in Grasse, (France’s historic perfume capitol) at the restaurant of one of my favorite chefs: Jacques Chibois. His restaurant, La Bastide St. Antoine is really something to behold. A bastide is essentially an old farm, most are now updated and remodeled. 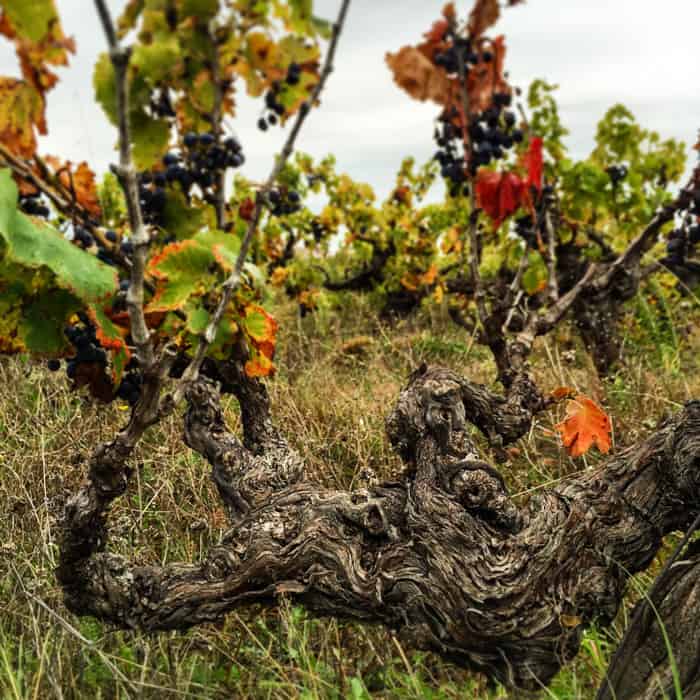 An abandoned vineyard we walked past-these are everywhere.

His is located in front of a large terraced olive grove, vineyard, and herb garden. Getting to walk through the garden before dinner was like strolling through a dream- I’ve read about it over and over in his book Provence Harvest throughout the years, but never thought I’d be able to actually walk in his gardens, where he has various obscure herbs and plants. 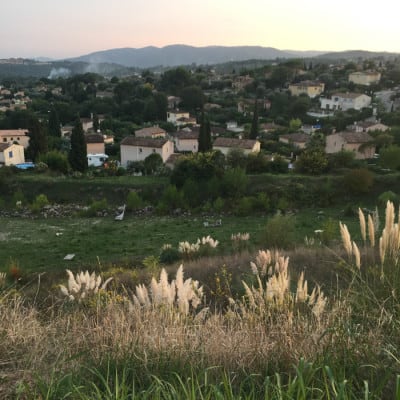 View from the Bastide St. Antoine

Dinner was fantastic and hyper seasonal. Every course but one was mushroom themed, which was eerie. Here’s a translated version: 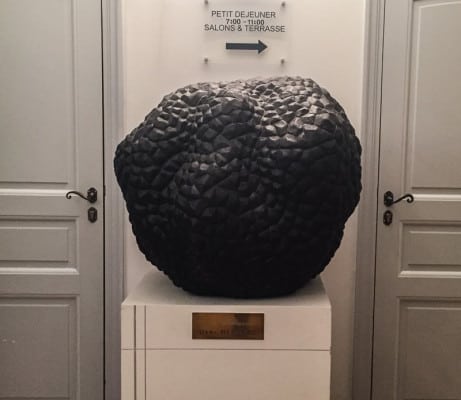 What make the dinner even more special though was that Jacques Chibois himself came to the dining room at the end and greeted every table. Thank god my girlfriend speaks fluent French. She translated our conversation and I got to tell him how I’ve followed him for years and how he’s influenced my food. It was, an experience. 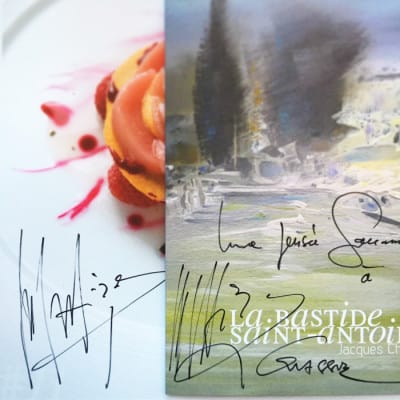 Had to get some signature from Jacques.

All French restaurants can’t be Jacques Chibois though. Surprisingly most of the other “nice restaurants” were unimpressive, and over priced. Things regularly arrived under-seasoned, or over cooked, or both. It’s just like being in America, there’s good food, and not so good food. Funny enough, one of the things I was least impressed with a number of times were the French Fries.

I’m not complaining though, oh lord no, you just have to be judicious with what you eat. Some of the best food we had was homemade, or pre-cooked things like charcuterie, pates, and cheese. 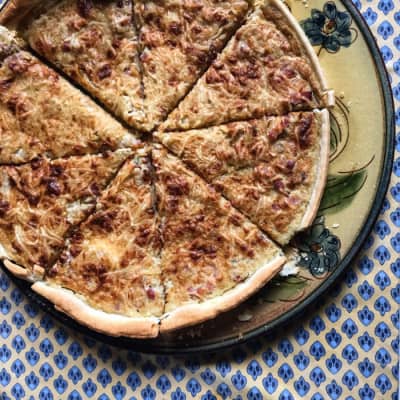 Homemade quiche Lorraine, at the home of a potter near Seguret.

There was one terrine in particular called the “pate de girolles” (chanterelle pate)  that stood out to me-a pork terrine flecked with chanterelles, reeking of foie gras, and topped with at least 1/2 and inch of pure rendered foie fat. We ate it with our fingers out of wax paper walking down the streets of Aix-en-Provence looking for a baguette to eat it with, but we never got to the baguette. Don’t worry, I backward engineered the terrine for you already, I’ll share it soon. 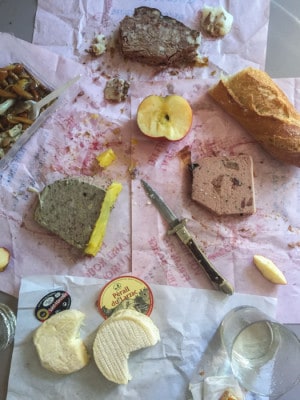 Lunch one day-charcuterie, bread and cheese. Nothing else needed. The chanterelle pate is left, center.

The pates and charcuterie were great, but the cheese was a close second. After years of begging cheese purveyors to source me St. Marcellin cheese, (the favorite of legendary French chef Fernand Point) I got to try some unadulterated by pasteurization, and it’s likely the best washed rind cows milk cheese I’ve ever had. High end grocery stores will get it once a year, usually at Christmas-get your hands on some and you won’t be disappointed. 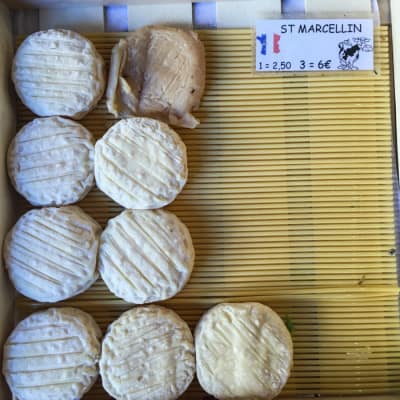 One more foodstuff. Soup de poisson is a Southern French specialty. It’s a murky brown fish soup reeking of shellfish and other sea creatures you can’t quite put your finger on. It’s brothy, but with pulp from the fish it was made with that’s been put through a food mill, and traditionally served with rouille mayonnaise and croutons topped with gruyere. The soup is served alone in a crock, and you top the croutons with the rouille and gruyere and let them float in the soup. You wouldn’t naturally think of melting cheese and shellfish, but somehow it works, and very well. The best one I had was served in a giant ceramic crock at L’estagnol, in St. Remy.

Besides the food, the other big thing is the sights.

It seems like every street is historic, and each town is an ancient Medieval village with an old castle on top. Every. Single. One. 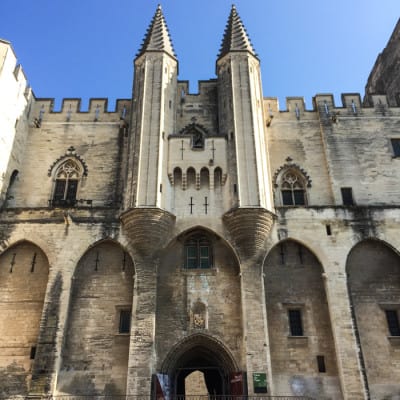 The Pope’s palace in Avignon

Particularly Medieval looking were the Pope’s palace at Avignon, and the towns of Seguret, and Vaison la Romaine, which is located on the top of a cliff not looking too different than when it was a fortified stronghold hundreds of years ago.

Even simple things like doors had lots of character. Here’s a little series of some of my favorites. 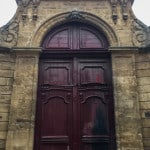 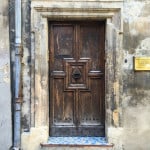 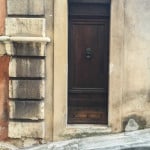 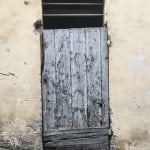 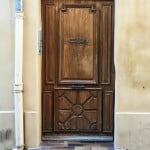 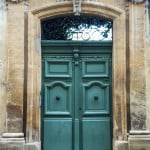 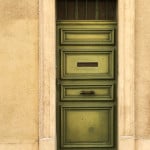 There’s something surreal about it really, just wandering around the streets, most of which are older than the U.S. itself. People come and go about their life, eons of history under their feet. 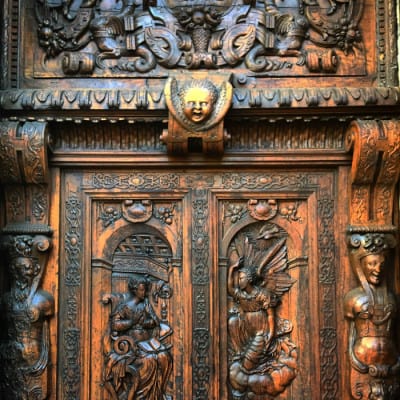 There’s a certain air to the French too. For one thing, I can’t remember seeing a single person who was overweight. The way people carry themselves is different. There’s no baggy clothes, no trashy looking outfits hanging on people dying for you to notice how unique they are, everyone just looks well dressed and in clothes that fit them.

Another interesting point my girlfriend pointed out is that all of the older French women really don’t look it. In America, when women hit “older age” they seem to want to wear plastic bags over their hair and wear velcro shoes. Even the French women who looked like they could meet death tomorrow were impeccably dressed, and looked years younger than they were.

So, in a nutshell Provence is awesome, put it on your bucket list.