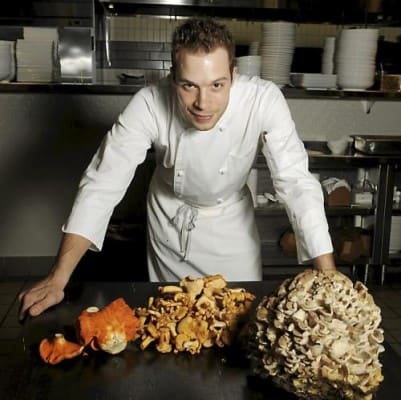 Alan Bergo, sous chef at the Heartland Cafe in Saint Paul’s lowertown displays an array of mushrooms he uses in his dishes. Bergo has become a self taught expert on culinary mushrooms. Here he shows off Lobster Mushrooms, left, Chanterelle mushrooms, center, and a hen-of-the-woods mushroom, right  at  Heartland, Thursday, September 5, 2013. Photo: John Autey

Disclaimer: Despite the picture caption, I am no expert, not even close!

Sous chef at Heartland (289 E. Fifth St., St. Paul; 651-699-3536; heartlandrestaurant.com) and mushroom hunter (his website, where he writes about foraging and cooking wild mushrooms, is foragerchef.com)

When you were little, what did you want to be when you grew up?

I grew up in a farmhouse on a five-generation farm. I had a lot of time with my mom in the kitchen. I had my own little plastic pots and pans. When I went to Hamline, I got a business degree; cooking was something I never thought I could do professionally. I got sucked into it when I realized I didn’t want a job in an office or something blah like that.

Shucking corn on the steps of the farmhouse with my dad.

What was your first job in food?

Working at Hardee’s when I was 15. I was a cashier.

How did you wind up in the restaurant business for good?

I had no real fine-dining experience. I had been working full time through college at crappy bar and grills. But I talked my way into a job at Trattoria da Vinci with Angelo Volpicelli. He inspired me to pay attention to traditional Italian ingredients. And he didn’t smoke. He didn’t drink alcohol. He didn’t drink coffee. His chef coat was always pearl white, not a spot of sauce on it. He was like a Zen master.

How would you describe your style of cooking?

It definitely has changed, especially during the past couple of years. It’s very European influenced, especially Italian and French, but I use those classical techniques with Midwest ingredients. That started when I was working for Lenny Russo, chef and owner of Heartland restaurant, about three years ago.

What’s your favorite dish to cook?

Oh, man, that’s like asking Angelina Jolie who her favorite kid is. It depends on the season. Some dishes are very close to my heart, and one of them is a very simple pasta with mushrooms, garlic and chile that Angelo’s grandmother used to make for him.

About your other passion: How long have you been foraging for mushrooms?

For four years. When I was a kid, I didn’t even like to go outside. All I wanted to do was play video games, which was really sad because I lived on a farm. My dad is practically a naturalist, and I regret not learning from him. So when I was working with Andy Lilja (currently the dinner chef at the Colossal Cafe) at Il Vesco Vino in St. Paul (now closed), I watched these guys come in with mushrooms. They were the most expensive stuff the restaurant would buy, more expensive than meat. Then one day, I saw a chicken-of-the-woods mushroom when I was Frisbee golfing, and I told Andy about it. I went back the next day and picked it and ate it. It was awesome! The next year, I found my first morel. A friend and I stumbled upon a patch, maybe 5 to 6 acres, in the back field of a school. This year, we picked 500 morels from it.

You get up really early to pick mushrooms. Why would you do that after cooking the dinner shift every night?

It’s cooler in the early morning. And you want to beat the other people, most notably the eastern European population. Seriously, I’ve seen Russian grandmothers with walkers looking for mushrooms in the woods. It is totally ingrained in eastern European culture as a social activity. Usually the matriarch of the family knows about the mushrooms and tells the rest of the family what to pick.

What are your favorite mushrooms to hunt and eat?

Saffron milk cap. It’s supposed to be the first mushroom depicted in human history. It’s bright orange. We have a variety that grows only in the Midwest, but it is extremely elusive and grows only in extremely wet areas with aspen and birch trees. The biggest I’ve seen was about the size of a grocery-store portabella. It tastes pleasantly mushroomy and crunchy. Some mushrooms in the family have a fishy flavor. I also like chanterelles and lobster mushrooms, which have an even stronger fish flavor.

How would you describe the mushroom-hunting community?

It’s strange and divided. You’ve got the very scientific people from the North American Mycological Society and mycological groups in each state. Then there are all the Telluride Mushroom Festival-goers, who are like the belly-feeding, free-spirit, happy-go-lucky, geeky, nerdy people. They are also sometimes the people who want to eat hallucinogenic mushrooms.

Where do you fit?

The Telluride group. I try not to be stuck up or prudish like some of the more scientific people. I try to make foraging seem fashionable. It’s a burgeoning hobby.

What do you do with your mushrooms?

I want to make it clear that it is absolutely illegal to sell mushrooms to restaurants. They can buy wild mushrooms only from a certified seller. And right now in Minnesota, there’s no way to get certified. All of the mushrooms at Heartland come from Michigan. We are working to change the law. (Bergo and Russo are on the Wild Mushroom Advisory Committee, which is trying to change state laws on foraging and selling wild mushrooms.) But that effort is taking a long time, and that’s unfortunate because we have so many cool varieties of mushrooms that grow only here. There’s the leather veiled bolete, which grows in a bubble like a little force field that keeps out disease and bugs.

What’s your favorite restaurant to eat at as a patron?

Los Ocampo. They make their own masa flour. I like to take my mom there because she’s fluent in Spanish and loves all that stuff. The best one is right off White Bear Avenue and I-94.

If someone were to play you in a movie, who should it be?

Val Kilmer, before he got fat.

I’m going to keep doing what I’m doing because I love working with Lenny. Even though I can’t bring mushrooms into restaurants yet, in an odd way, foraging has changed my life. This year, I showed my dad his first morel. He’s so in touch with nature but doesn’t know about mushrooms. That I could teach him something about nature was really special. I want to change the gastronomy of Minnesota, and I want to be in touch with the place where I live. It’s kind of unexplored territory.