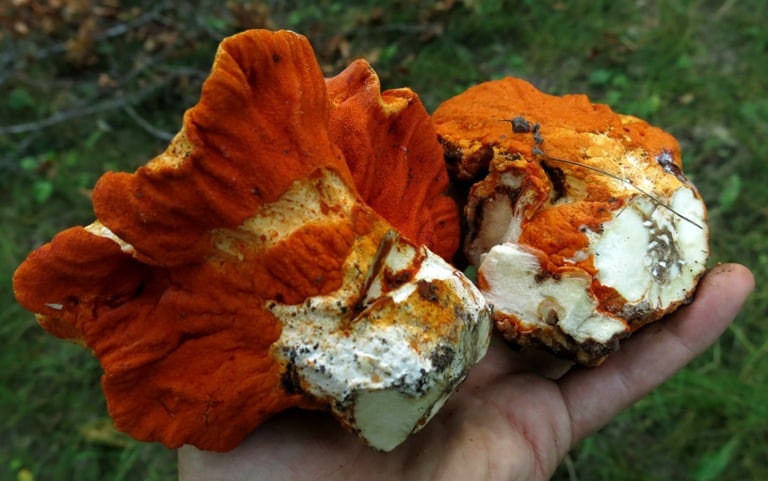 These typically large, contorted looking mushrooms are actually the product of one mushroom affecting another. Most knowledge points to them being the product of the fungus hypomyces lactiflourum infecting a species of russula or lactarius.

When the infected mushroom's mycelium attempts to create a mushroom, it instead forms twisted versions of itself, with a red coating that turns food cooked with it a deep yellow, like saffron or paprika. Their name is usually said to be due to their coloring, but lobster mushrooms definitely do have a slight shellfish aroma and quality, similar to some typical russula and lactarius species you may eat. They fruit in the fall in Minnesota where I live, after the chanterelles and just before the hen of the woods. I usually find them in mixed forest areas, typically with aspen or birch.

Lobster mushrooms have a delicious, crunchy texture when cooked, and they are meaty enough to be a stand in for protein in vegetarian entrees.

Dried lobster mushrooms make a great soup. As a fun play on lobster bisque, I crafted this. It is a mild soup, pleasantly mushroomy, and technically vegan if you don't use the croutons, but its much better with them. 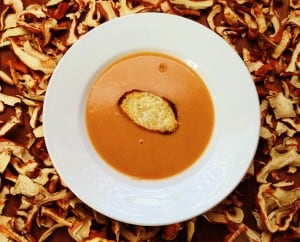 This is a fun play on surf and turf. There aren't any oceans near Minnesota, so I use a little poetic license to apply this theme to ingredients found in our woods. It also a fun variation on how one can make a simple dish of steak and mushrooms, to be accompanied by some side dishes. 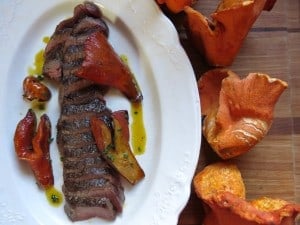 Lobster mushrooms are big enough to fill the role of meat in a meal. Here I outline a very simple recipe for serving them braised whole, alongside cooked wheatberries, wild spinach, and a the jus from cooking the mushroom itself. 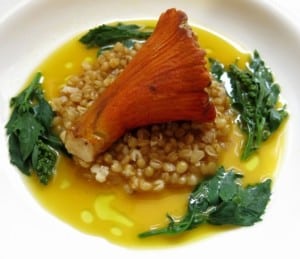 A duxelle is a classic way of cooking large amounts of mushrooms. Here I give you a rundown on how you can make some with your harvest of dried wild mushrooms. When dried, the shrimpy aroma of lobster mushrooms is intensified. 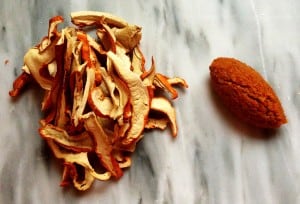