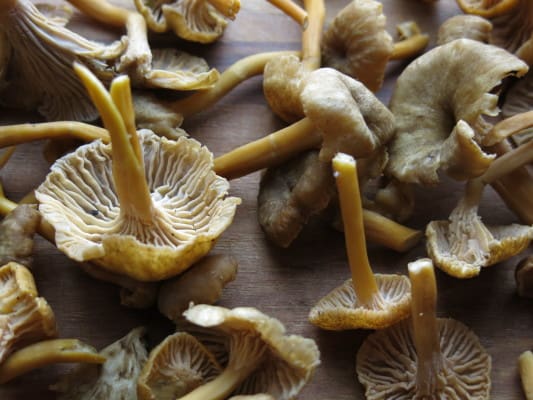 True Craterellus tubaeformis. These are from Oregon, not from Minnesota and Wisconsin, where I hunt. If you buy yellowfoot chanterelles commerically, more than likely this is the species you’ll receive, and there good.

Small, fragile, and petite, yellowfoot chanterelles, also known as Craterellus tubaeformis (formerly Cantharellus), among a few other closely related species, are a great mushroom to collect for the table. To complicate things, the species I have pictured in this post are only two of a number of mushrooms that fall under the umbrella of what we would call “yellowfoot chanterelles”. Technically there’s Craterellus sphaerosporus, lutecens, and tubaeformis that I know of, and there are likely more that are undocumented.

For the majority of you reading this, you’ll be looking at mushrooms that resemble the picture at the top of this post. But, if you live in the Midwest, you’re going to see a different species, actually a better tasting, and more visually attractive mushroom, but, unfortunately, you’re not going to see as many of them, heck, you’ll see only a fraction of them compared to what a hunter on the West Coast will see.

Yellowfeet from California and the Pacific Northwest just fruit heavier than the species we have in the Midwest, and the same is true with actual chanterelles, or mushrooms allowed to be in the Cantharellus family (yellowfeet used to be in Cantharellus but have since been moved to the trumpet family, and it makes a lot of sense)  So, even though our species tastes better, it’s nothing to right home about, since, if you end up finding enough for dinner, you’re in the top skill percentile of Midwestern mushroom hunters, and even then, you probably got lucky. If you don’t know what you’re looking for, these things (especially in the Midwest) are teeny tiny, and easy to walk right past. Here’s a side-by-side comparison of the two different species below, note the scale of the Minnesota species, these are small mushrooms, where the PNW are 2-3 times the size. What kind of differences can you pick out? 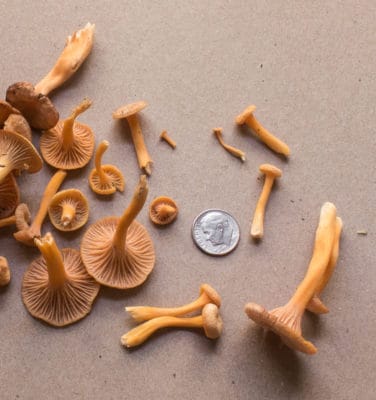 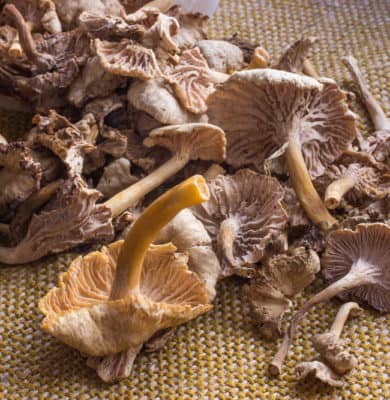 Where I pick these in Minnesota, they like to grow in wet areas, typically near oaks-the same places you might find black trumpets, so if you know a place where trumpets grow, make sure to look around the area for yellow feet too. Hunting around small ponds and areas that hold moisture are really your best bet for these, they really like it damp, and wet.

Since they’re mycorhizal, they will come back year after year in the exact same places, rain permitting. I don’t usually find them in mass quantities, but I know that in the Pacific Northwest they can be picked in very large numbers, and I used to go through 30 lbs a week during the Winter mushroom season. With their small size, and hollow stem, just like black trumpets, 30lbs is a lot. If you find a lb of these, consider yourself a winner, and don’t forget where you picked them. 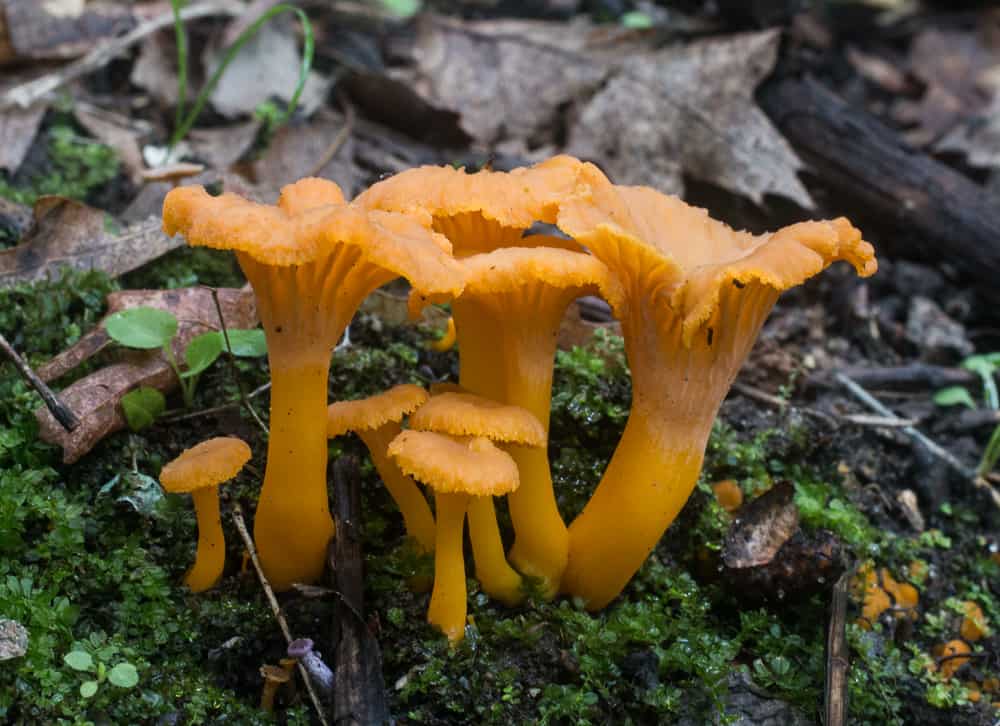 Yellowfoot chanterelles in Minnesota, I pick small amounts of these every year in a very wet woods, in one of the same places I pick black trumpets.

Flavor wise these are great, they have a sweet aroma like a golden chanterelle, but a structure that’s similar to a black trumpet, with their hollow stem and thin flesh.

You’ll need to find a bunch of these to make a meal, since when they hit a pan they wilt quickly and cook down, but their flavor makes up for that, as well as the fact that they dry easily. They’re a great addition to any sort of broth or stock, and of course, like most mushrooms their flavor is amplified by cooking them with cream. 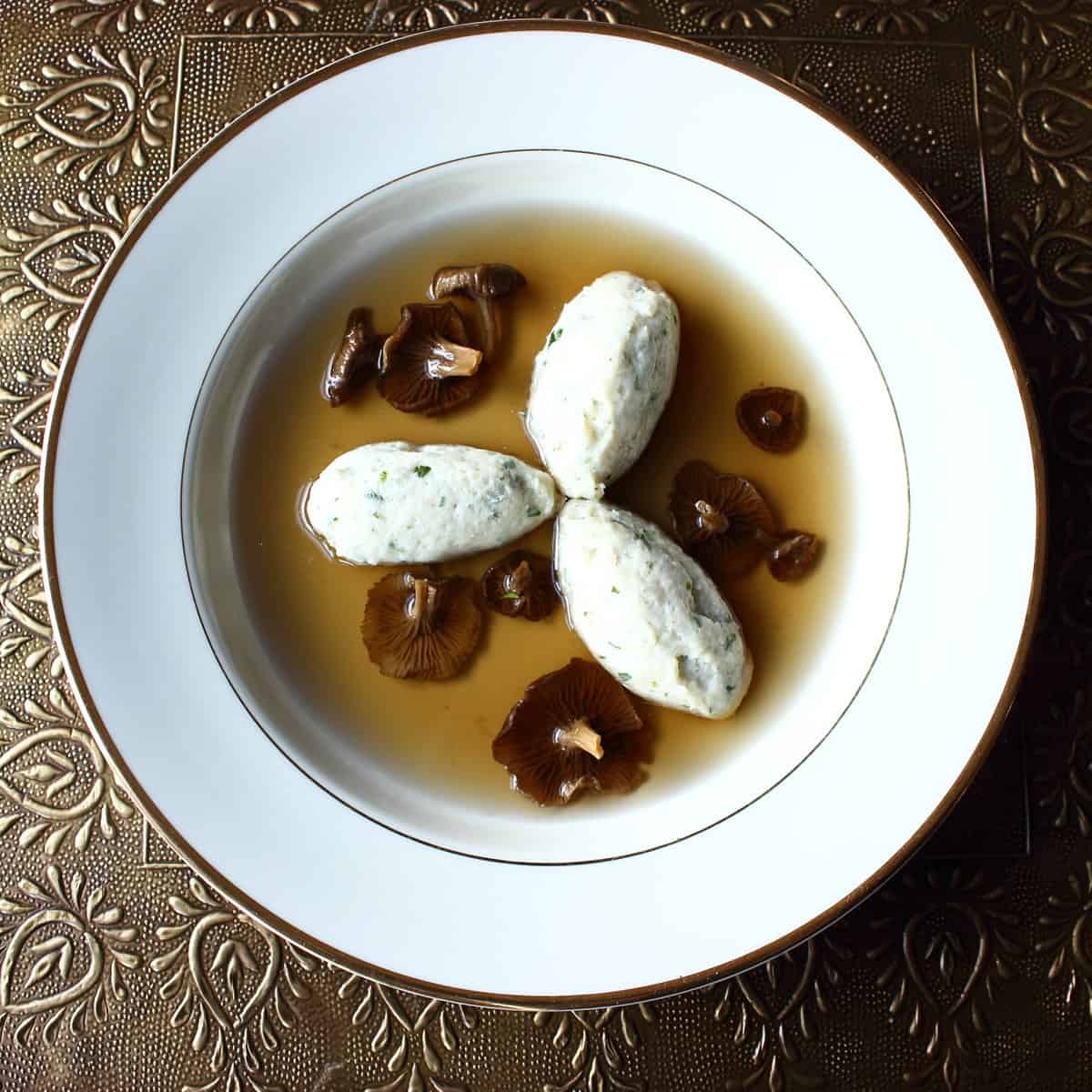 Yellowfeet are great rehydrated in simple soups and broths.

When I find these, I typically dry them for future use, since if they were picked in an area that was sandy or after a rain, they will be dirty, and cleaning them with a brush is liable to just break them apart without getting them clean at all. If you dry them though, their structure tightens up a bit, and swishing them around in some of their reconstituting liquid will allow you to remove all of the grit, no problem.

These can also be pickled, but I would make sure to use a mild flavored pickling liquid, without sugar. Another great way to enjoy them is a conserve, which is something in between a marinade and a pickle. 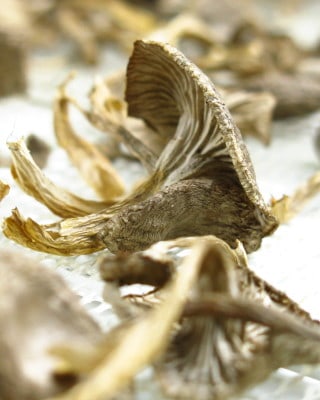