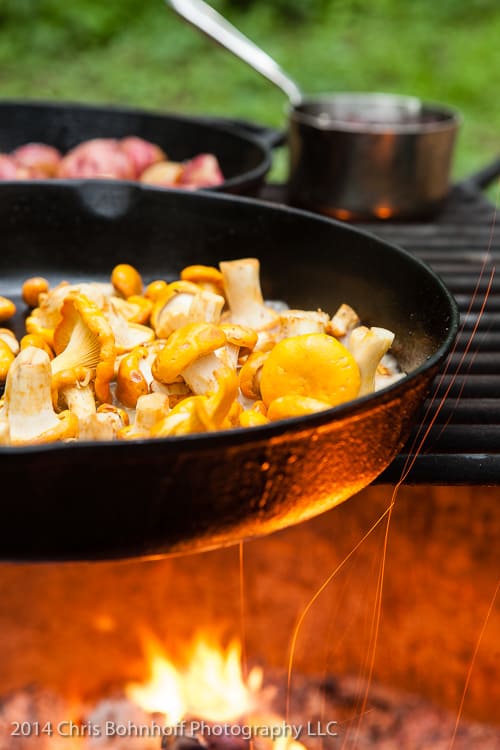 Love the shine from the fire in this shot.

When my friend and photography mentor Chris Bohnhoff asked me if I’d like to do a little mushroom hunting and cooking project with him a couple months ago I was thrilled. He has a sort of series he does involving chef’s and some of their varied talents. Check out some of his other great work HERE, at his website.

The focus would be on cooking in the moment and using ingredients growing in the area. First we would hike around a bit to see what wild edibles we could scrounge up to play with. Afterwords we’d cook some food-a couple simple dishes, incorporating what we found during our outing.

Chris and I shot a couple ideas back and forth on what might be fun to cook, eventually we came up with a loose outline. We picked two entrees: one based around duck, and one with rainbow trout, as well as a giant cast iron pan full of chanterelles that would be shot sometime, depending on the light settings and how the weather behaved. 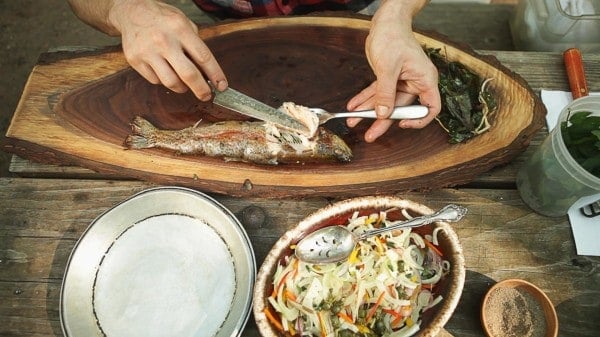 My mind, as always, was a whirlwind of ideas. When the time came to cook the trout, I had switched most of the ingredients around to use some things I didn’t expect to see on our hike, like anise hyssop and wild Szechaun peppercorns/prickly ash. In Japan they cook with the leaves of prickly ash, and call them “kinome”.

I thought it would be fun to use the aromatic leaves alongside their tingling, lemony berries. What I ended up doing with the leaves was using them to wrap the trout, an idea I got after hearing Chippewa Indians used to wrap fish in burdock leaves before cooking.

As I cooked, we spent time shooting the ingredients, playing with different ways to view the prep, but I think that the most important thing was at the end of it all, we all sat down and ate together. This wasn’t the sort of food stylized food you see on billboards and ads, it was real food that we ate, and it was delicious-a little magic in the woods.

In addition to shooting the dishes we ate, Chris worked on a fun little video too. Let me tell you though, “fun little video” really doesn’t do it justice. He has an exacting eye for his art. The proof is in the pudding, or in this case the rainbow trout. You be the judge though. Here’s the video:

I’m including the recipe for the trout dish, its really great. Seasoning the cavity of the trout with the Szechaun peppercorns perfumes the meat with this lemony flavor I can only describe as…haunting. You don’t get the tingly effect from the berries this way, but all of the aroma comes through. It’s a great way to use wild peppercorns if you find their mouth numbing sensation a bit odd. Wrapping the trout in the kinome leaves helps the skin not stick to the grill, but there is enough space in between the leaves to still get a nice char here and there on the skin. 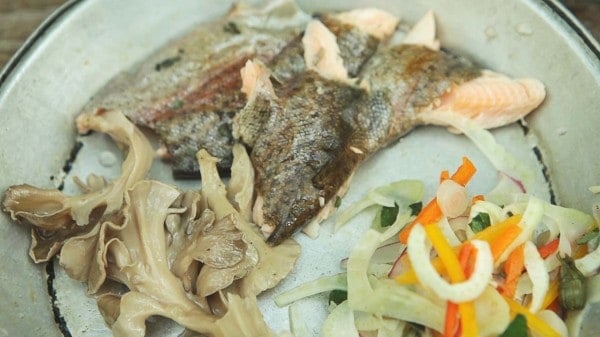 If you can season and wrap the trout ahead of time and allow it to sit for a couple hours, the flavor of this will be more intense. It takes time for the scent of the kinome leaves and the berries to perfume the meat.

Serves 2 as an entree

This is a variation on a salad I made for my friend Mitch to impress his mother on a trip home years ago. He informed me it’s been a family favorite ever since. A great salad for summertime, when eating hot food doesn’t sound good to me.

Serves 4 as a garnish to fish, chicken, or pork.