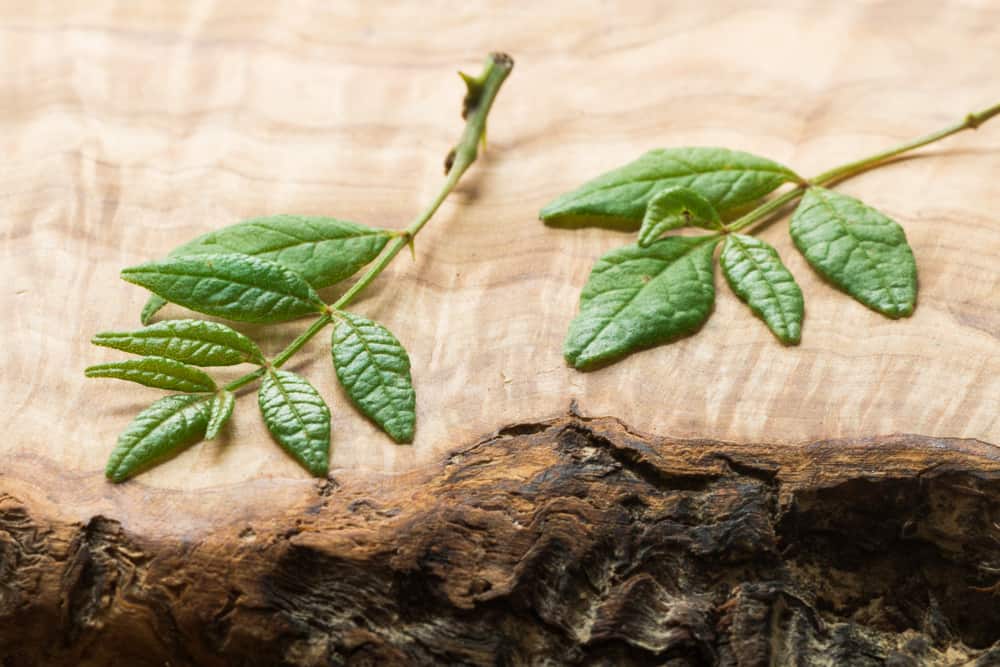 In Minnesota and the surrounding area, its too cold for citrus plants to grow, or is it? Prickly ash/Zanthoxylum species is technically in the rue/citrus family. It doesn’t make a fruit like a lemon or lime, but it does make fruit-small, limey tasting berries which are technically wild Szechuan peppercorns, which I talked about previously in this post here. I like adding the berries to things were fresh citrus would be good, especially with raw or cured fish. 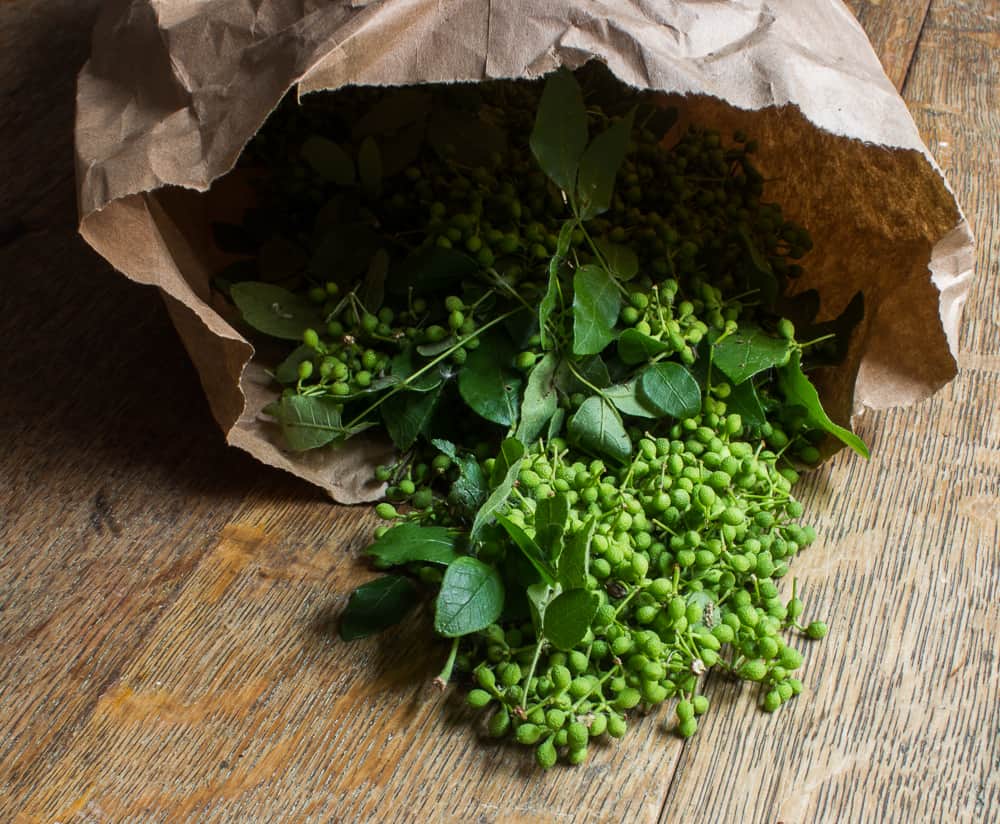 I’ve found unripe green berries of the plant all taste great, no matter what species, and can be eaten raw or packed in salt or brine to preserve them. They pack a great citrus punch.

Here and there I saw that in Japanese, the leaves are referred to as “kinome”, derived from ki (tree) me (bud) respectively, and also as “sansho”. The traditional berries harvested for sale and imported to the U.S. should be: Zanthoxylum simulans and Zanthoxylum bungeanum.

Prickly ash is everywhere, so there are plenty of leaves to try. But every time I tasted them I thought, “There’s nothing special about this!”. The taste was always bland and spinach-y with only a hint of the citrus flavor the unripe green berries have, they really weren’t exciting at all.

One day my girlfriend and I were taking a walk up the hill on her farm by where the prickly ash bushes were, and as we walked past, I thought of how unimpressed I was with the leaves, and we talked about them for a while on our walk. 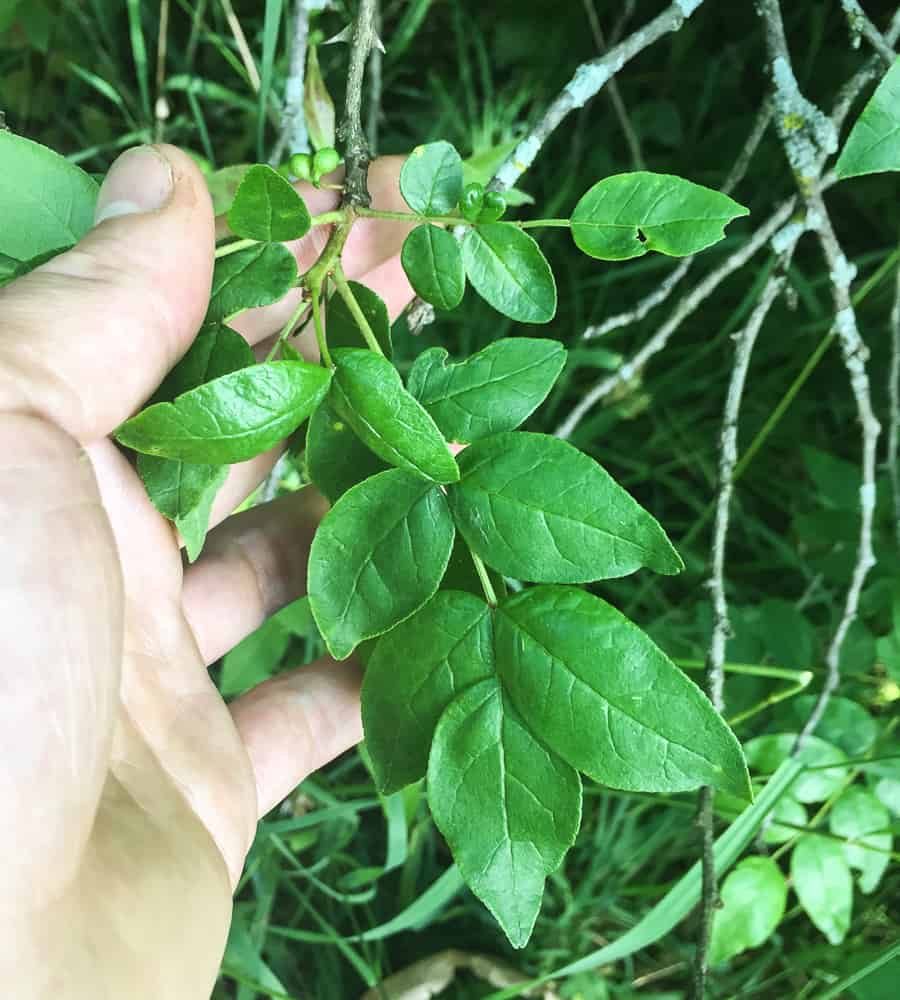 Talking about food has a way of making you crave it, so I munched on a kinome leaf, still unimpressed. As we walked by one of the bushes, my girlfriend plucked another leaf and tried it. “Oh this one is really good!” she said. I tasted one from the same plant, and it was much more interesting than the other I’d just eaten, It was a dead ringer for kaffir lime, the citrus-y leaves used in curries.

It took me a little while to understand what was going on with the leaves, but now I understand. Just like with hunting porcini, the difference in flavor was because I’d been eating not one, but a number of different species of prickly ash, and they don’t all taste the same. 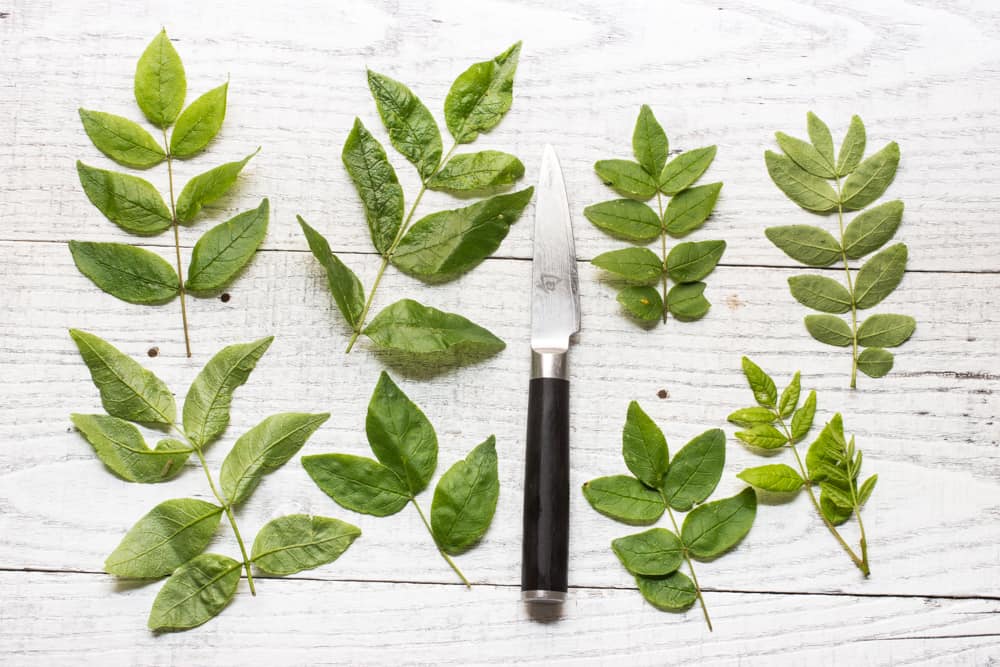 Two different species of kinome leaves. My favorite are on the right. Note their smaller size, close proximity of leaves, larger number of leaves per branch, and lack of a waxy coating compared to the species on the left.

The flavor of the leaves is powerful, but delicate at the same time. To release their perfume, the leaves need to be chewed, or broken up somehow, otherwise you won’t taste them at all. I’ve seen Japanese cooking shows where they put whole sprigs of the plant in their palm and “clap” it to activate it’s scent, which works ok, my line cooks sure get a kick out of it. Also, the more ingredients that are in a dish, the less you will taste the leaves, less is really more with these, and they need to be on their own to shine.

So, my assumption is that the one tasty species I’ve come across is about as close to “real” Szechuan peppercorn species as I’m going to get here in Minnesota. Like I mentioned, It’s been very difficult to find a species of prickly ash with good tasting leaves here in the Midwest, but they’re out there and if you taste the right one, you’ll know it.

I’ve noticed a similarity in the leaves of different species too, mainly that the leaves of the tasty species are a bit smaller, and more ovoid than the others, as well as being closer together and more numerous on the branch. Other than that though, you really just have to taste them to see the difference.

Like I said, I love to serve these with fish. Here’s my favorite summer preparation so far-a light tuna tartare that features both the berries and the leaves of this special plant. 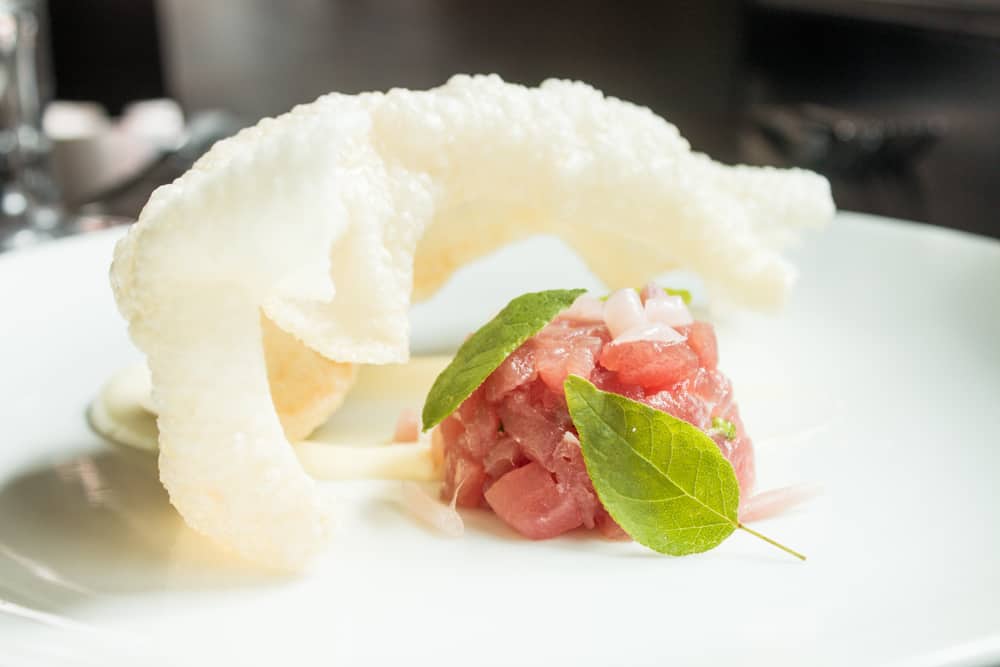 Season the tuna with salt and a little of the sunflower oil, pickled ramps and a few of the Szechuan peppercorns to taste, making sure to double check the seasoning before you plate the dish. On the middle of a chilled plate, place the tablespoons of the lemon aioli, then put a small ring mold down and pack the tuna mixture into it, pressing down lightly with a spoon to make it stay put. Garnish with some of the kinome leaves and a rice cracker, then serve immediately.