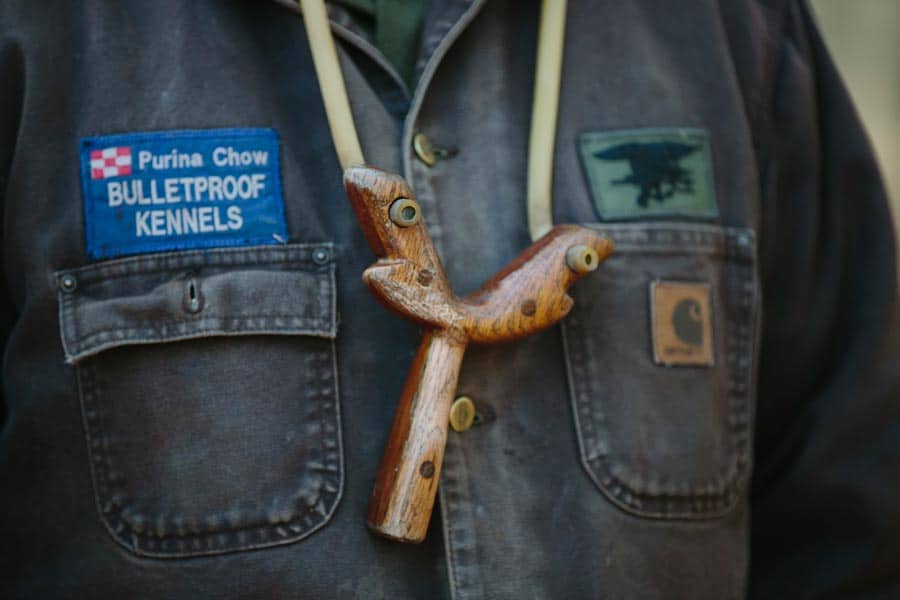 "Always take the crazy journey" is something my Father says, and is one of the most important pieces of advice I've learned from him. Life has been a roller coaster the last few years, but through all the work I have managed to sneak in some fun.

My favorite encounter work was work related, but not involving a kitchen. I got a call from a talent recruiter for a production company and she told me about a show they were going to pitch to networks: a series about 2 people hunting and cooking their food called Forage to Table.

They were looking for a chef at a restaurant who could harvest wild plants to cook with, check and check. The other co-host they'd found already, and would be the one hunting for meat, a military veteran from Florida they told me could kill a deer with a slingshot, a fascinating man and now friend of mine: Madison Parker. Madison Parker.

After a couple of skype sessions, the production company interviewed around the country and told me they wanted me to be the chef. I was floored. Did I think I was going to be on a T.V. show with a real life Rambo? No, not really, I've been down this road before and broadcast related stuff is always a longshot. Did it sound like a once in a lifetime experience, the perfect crazy journey my father told me about? Yes.

Hey Alan what are you doing next weekend? "Oh nothing, just flying to the middle of nowhere in Florida and shooting squirrels with Rambo!".

I flew down to Georgia and transferred onto a small plane about the size of a cessna, then it was off to a remote part of Northern Florida kind of by Tallahassee. The land was a lot different to this Yankee with an accent from Fargo. There's a saying about Florida: the farther north you go, the deeper into the south you are, and I'll be honest I heard someone mention the "War of Northern Aggression" while I was grabbing snacks at a gas station. 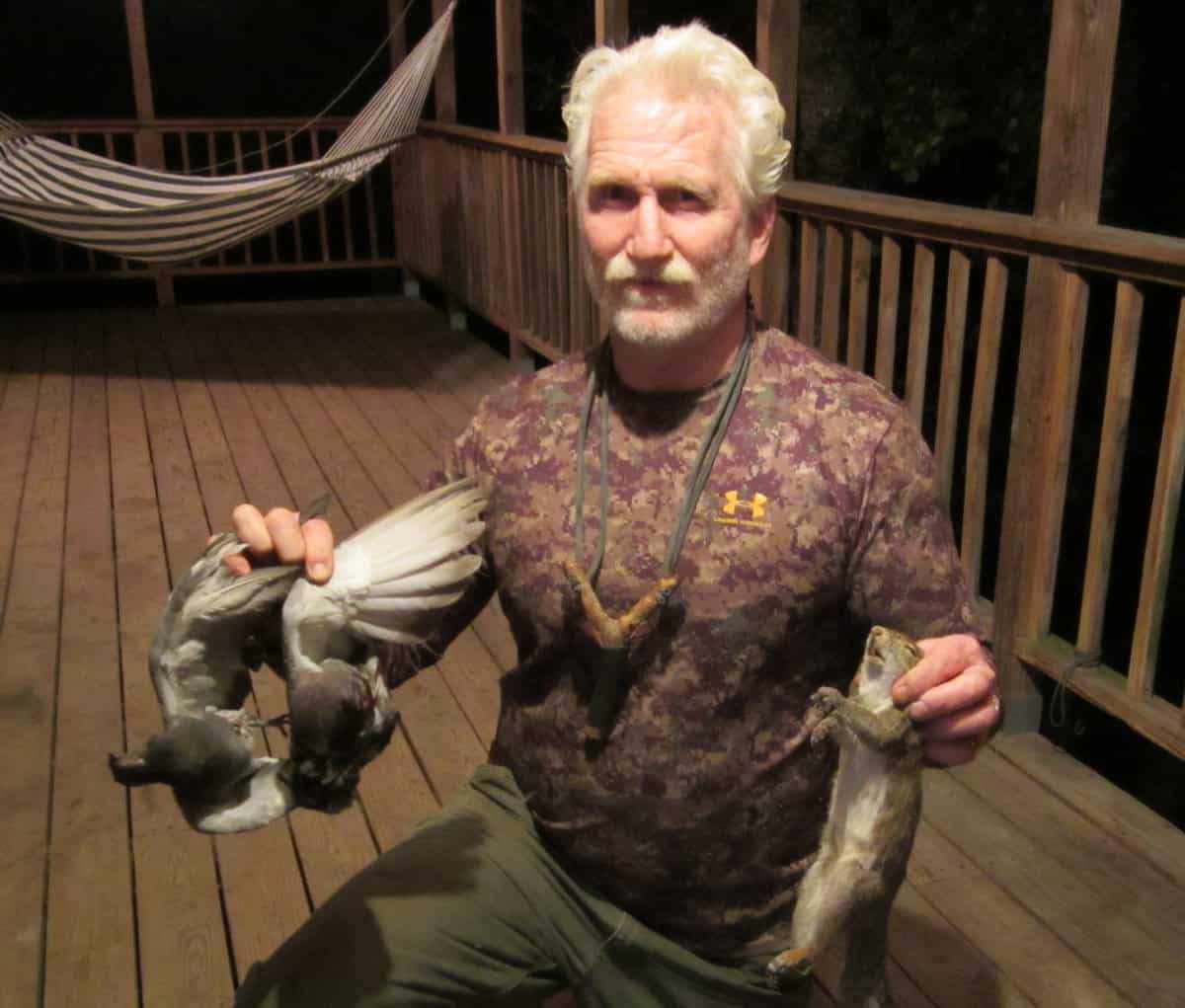 I was excited to be part of the shooting, but Madison Parker was the real star here. Long story short, Parker is ex military, a Vietnam vet turned off-the-grid navy seal trainer who also managed to do 3 tours in Afganistan at the age of 60. He's the real deal, and he does it all himself. 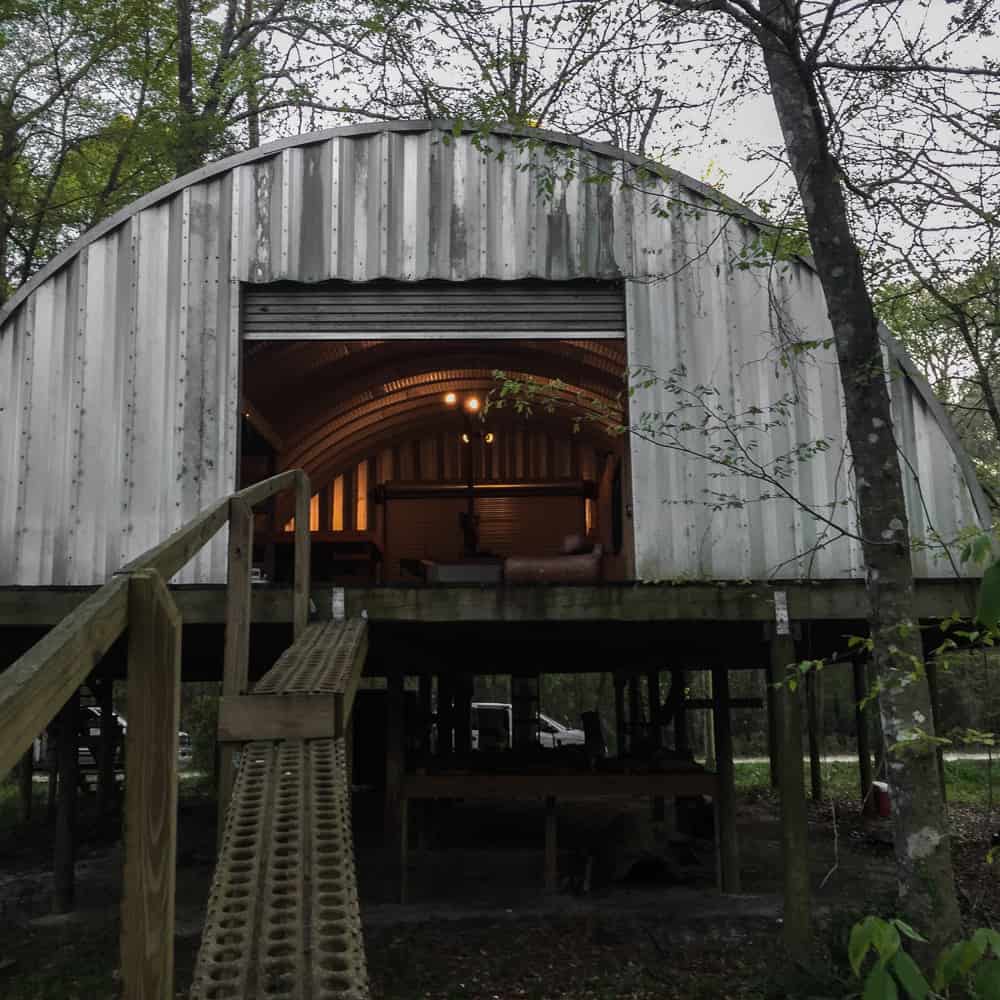 Madison's quanzit hut he built, where the Navy Seals train.

He's built his house, quanzit hut he uses for military training, spears, knives all manner of low-tech traps, but most impressive to me were the slingshots, which are what he's most known for. 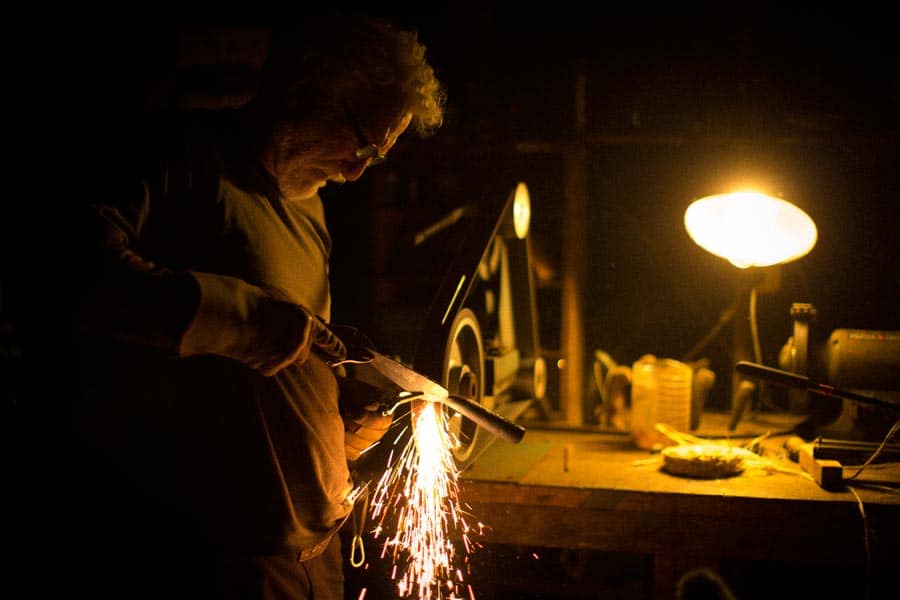 In his hands a toy becomes a firearm that's accurate, completely silent and capable of taking down fully grown deer since he has no problem with headshots. 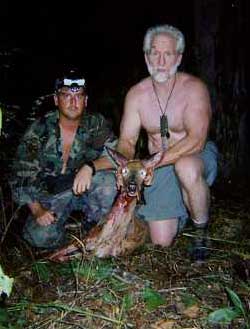 He's as close as you get to a modern day Rambo. I remember walking through his house filled with the military memorabilia you only get from a lifetime of service, looking a picture of him with a bunch of regular looking but built guys. He told me something like:

"That's some of my trainees from a few years back, they took down Osama Bin-Laden".

I then realized the gravity of who he was and remember thinking of a phrase along the lines of: HOLY SHIT BATMAN. 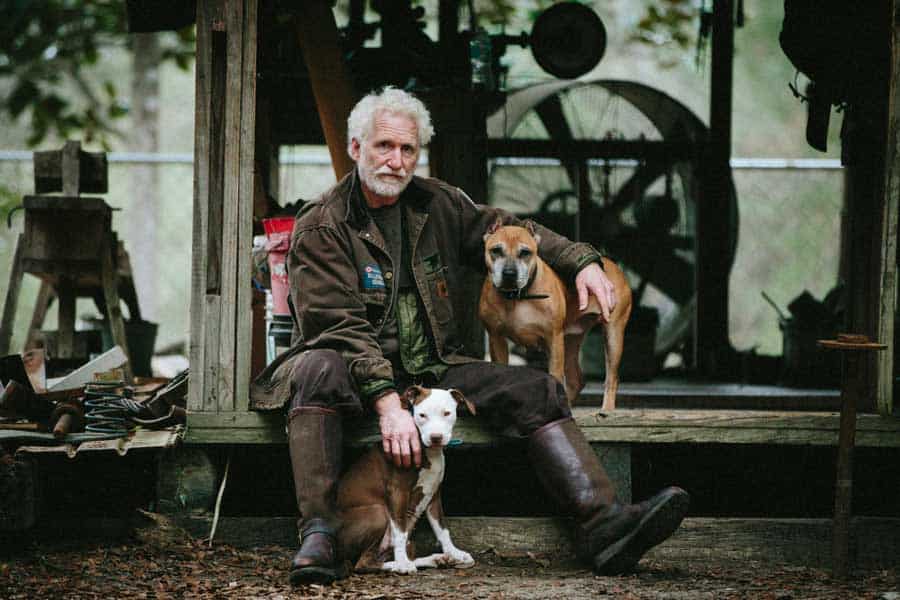 For the show we shot for two days straight dawn to dusk to get footage for what the film industry calls a "sizzle reel" or a quick snippet of a possible show the production company pitches to networks, who then choose whether or not to purchase it and fund it for broadcast.

A lot of equipment and coordination goes into this stuff. Every day there was two minivans chocked full of gear and a shooting team of 4-5 people. Each night after shooting we'd go and get tacos, and I'd greedily eat up the small talk about what goes on behind the scene of television production. The producer came with a resume from Survivor and the Apprentice, the casting director was involved with Chopped, Top Chef and various Food Network programs. It seemed larger than life, and I felt a bit out of place. 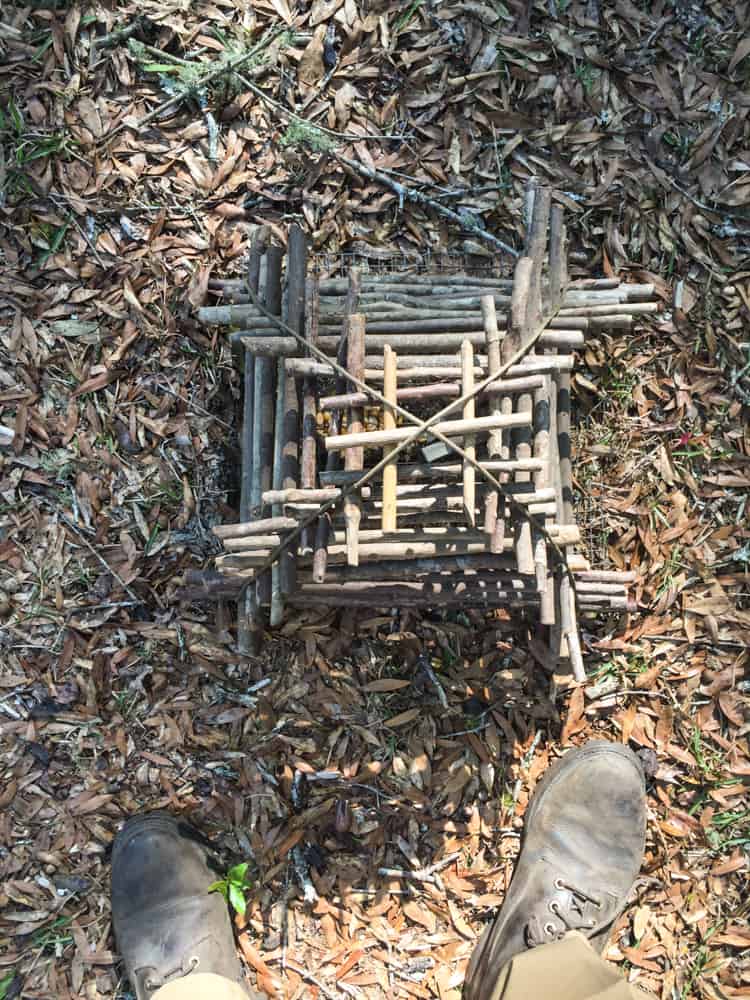 One of Madison's homemade squirrel trap, and what I thought was a beautiful, natural design.

The sizzle reel was to end with a large meal made by myself and Madison using things we had harvested over the two days of shooting. If I've learned anything about hunting things though, it's that is easier said than done and you had better try to stack the deck in your favor in case something doesn't work out. Mother nature's not a grocery store, it's more like she takes the form of an unpredictable lover, enemy, or both.

Luckily Madison had been working the previous week to hunt and trap some squirrels and rabbits. One neighbor, fearful that we wouldn't get the meat we needed for the shoot, prayed night and day for a week so that we'd have everything we needed, and god answered with a fat raccoon he trapped. We ended up not needing it, but he said their shoulders make great barbecue, next time coon.

The squirrels were the newest to me, and I was pumped to cook them for the first time. Madison hunts squirrels with a cool technique: two to three men armed with homemade slingshots and a pitbull. The hunters triangulate on a squirrel in the tree, then try to shoot it out. The pitbulls are a safe guard if the squirrel hits the ground and tries to run. It's a lot of work and coordination for a tiny creature, and a testament to how wily they are. 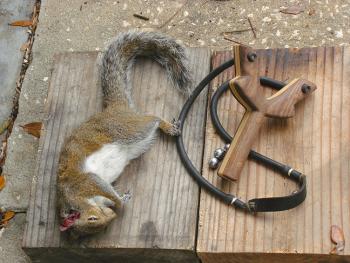 Needless to say being on the turf of an ex-military, living life Rambo meant meat would probably be the easiest thing for us to get, and it was. Vegetative matter (what was supposed to be my contribution) was going to be another story though. It was early spring in Northern Florida, and the landscape, besides being almost completely devoid of green life, was a lot different from what I'm used to seeing in Minnesota. The production company didn't really seem to care (or understand) though, as we basically shot everything from the hip, hoping the piece would fall together.

We were supposed to be able to trade meat for vegetables at a local off-grid trading post, but that eventually degraded in the end to a film assistant going to Walmart to get me some basic necessities, which I was not really happy with, but having one day to plan the meal meant I was going to have to flexible. 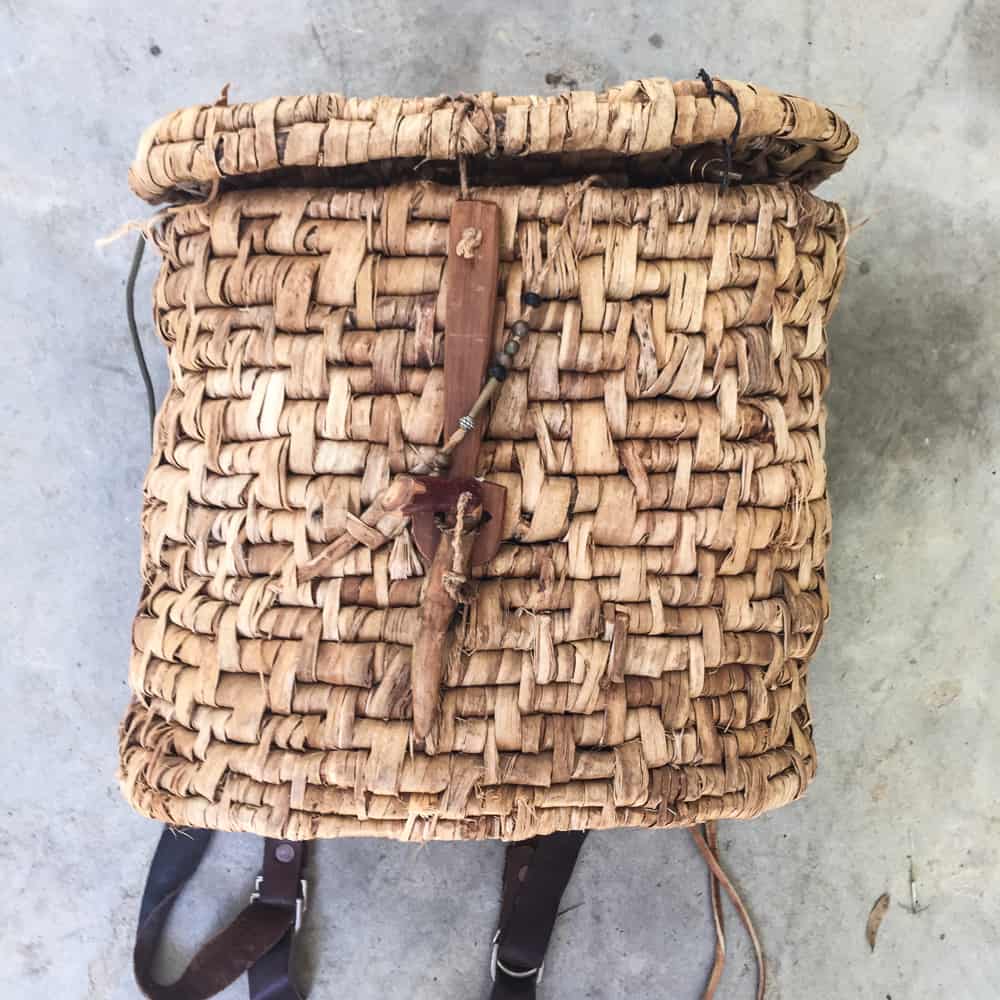 Did I mention Madison makes (and sells) his homemade gathering baskets?!

I was going to need to make 3 dishes for the dinner finale and all I had was meat. There was some local stuff to be found though, and my co-host had some friends, it being his turf and all. We went to Madison's assistant's Uncle's house, where he keeps bees that produce a highly regarded honey called Tupelo that comes from the blossoms of trees in the Swamps. 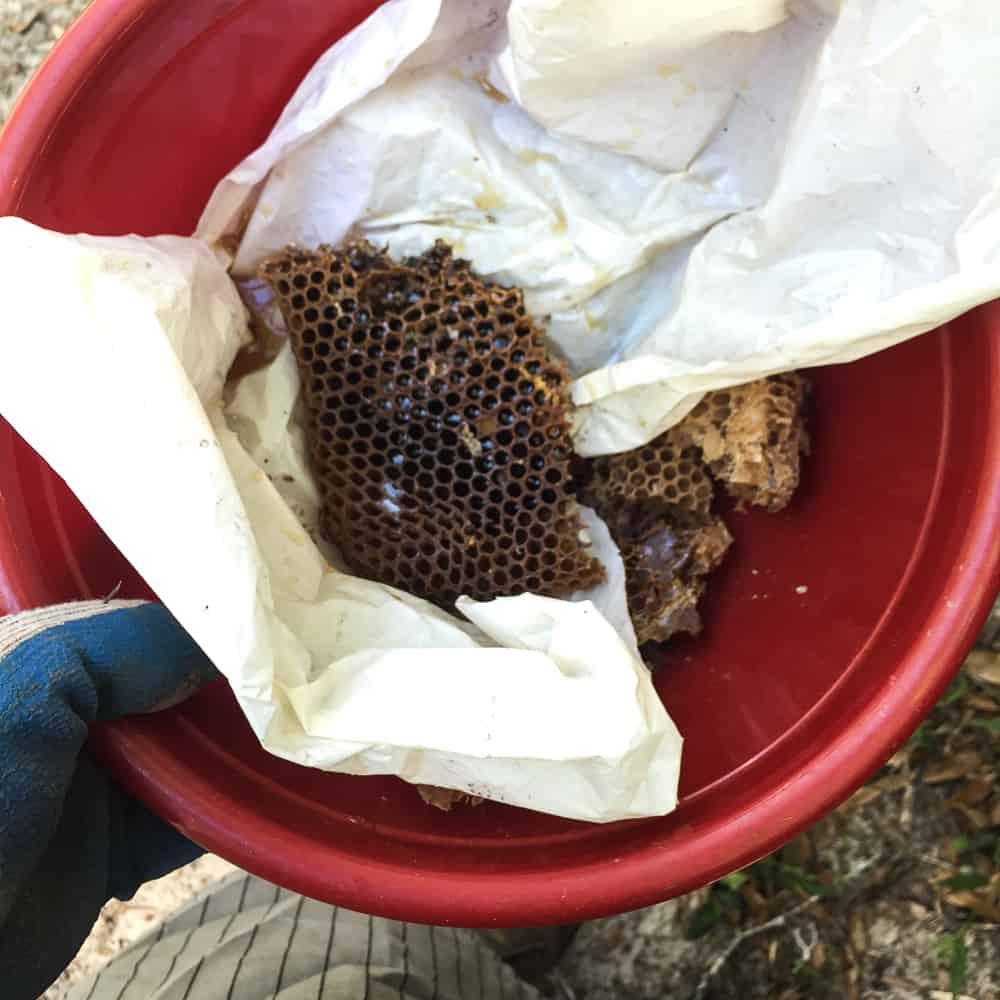 The local Tupelo honey, in it's purest form.

The trees on the property were also blooming with loquats, and Madison's assistant managed to snag me a few prickly pear fruit. I had all the makings for a cheeseplate, just without cheese.

I was still going to need two more dishes for the beauty shots at the end of the shoot though, for a total of 3. By the end of the first day I had narrowed it down to a cheeseplate, braised squirrel whipped into a mock-up of rillettes, and fish smoked over grapevines. 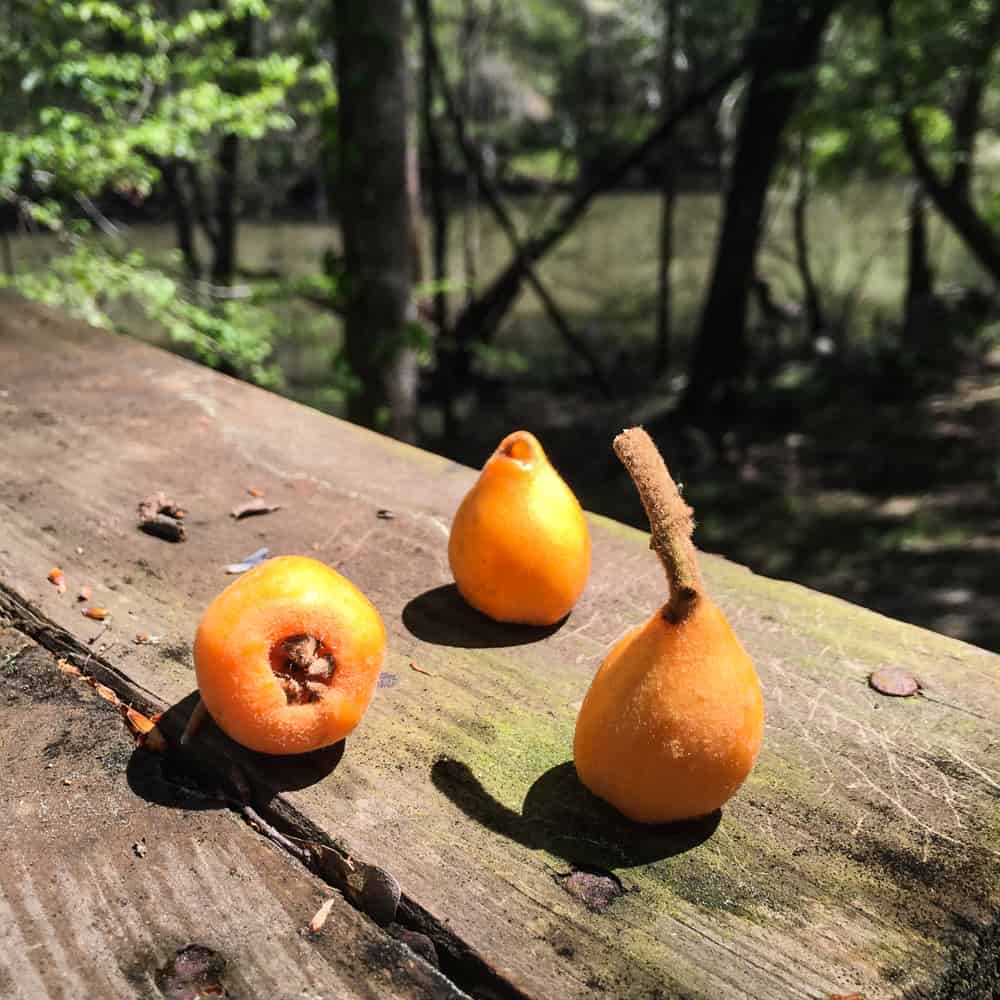 Pretty much the only wild plant that I got to pick was a new one for me: smilax, or greenbriar. They grow up in the Midwest, but something seemed different about the ones down in the South as they grew huge as thick as asparagus, I'd never seen anything like them. 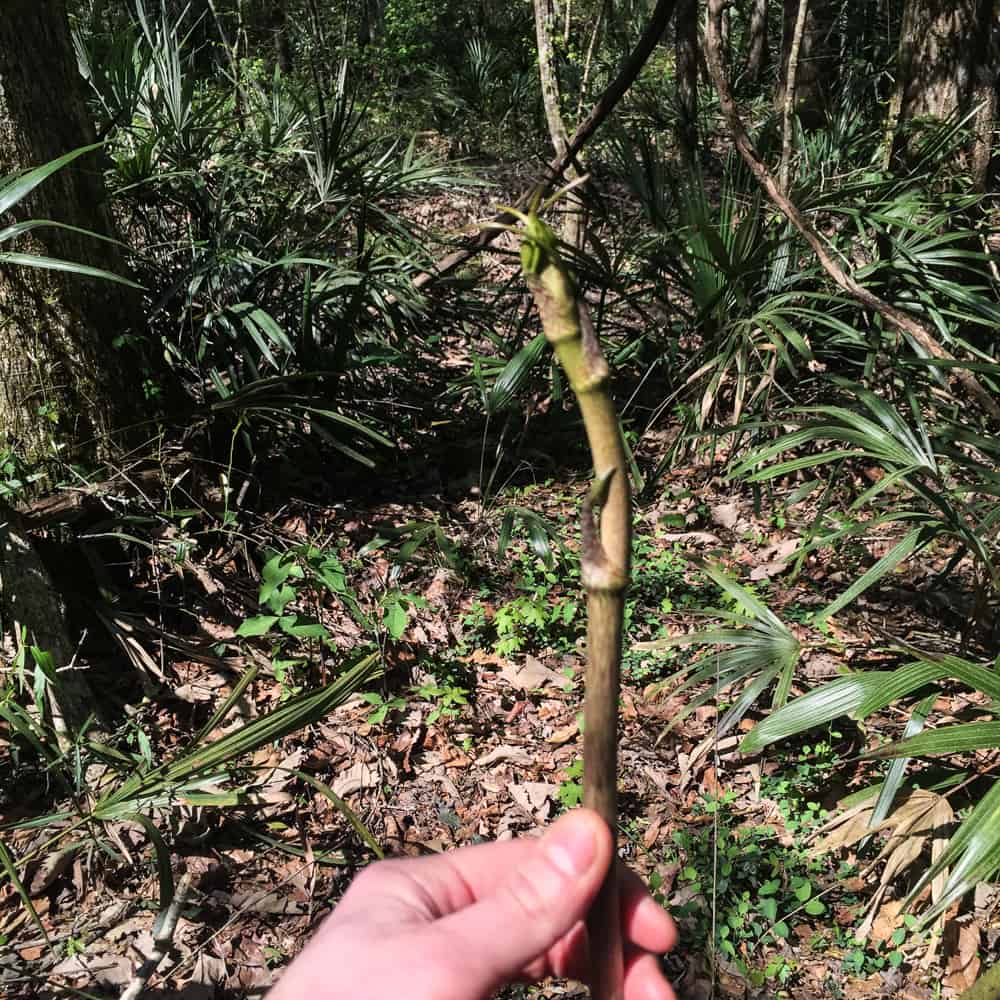 Parker's assistant told me that they called them "Florida greenbeans". I wouldn't say they taste like green beans, but they made a fresh tasting partner for my smoked catfish. 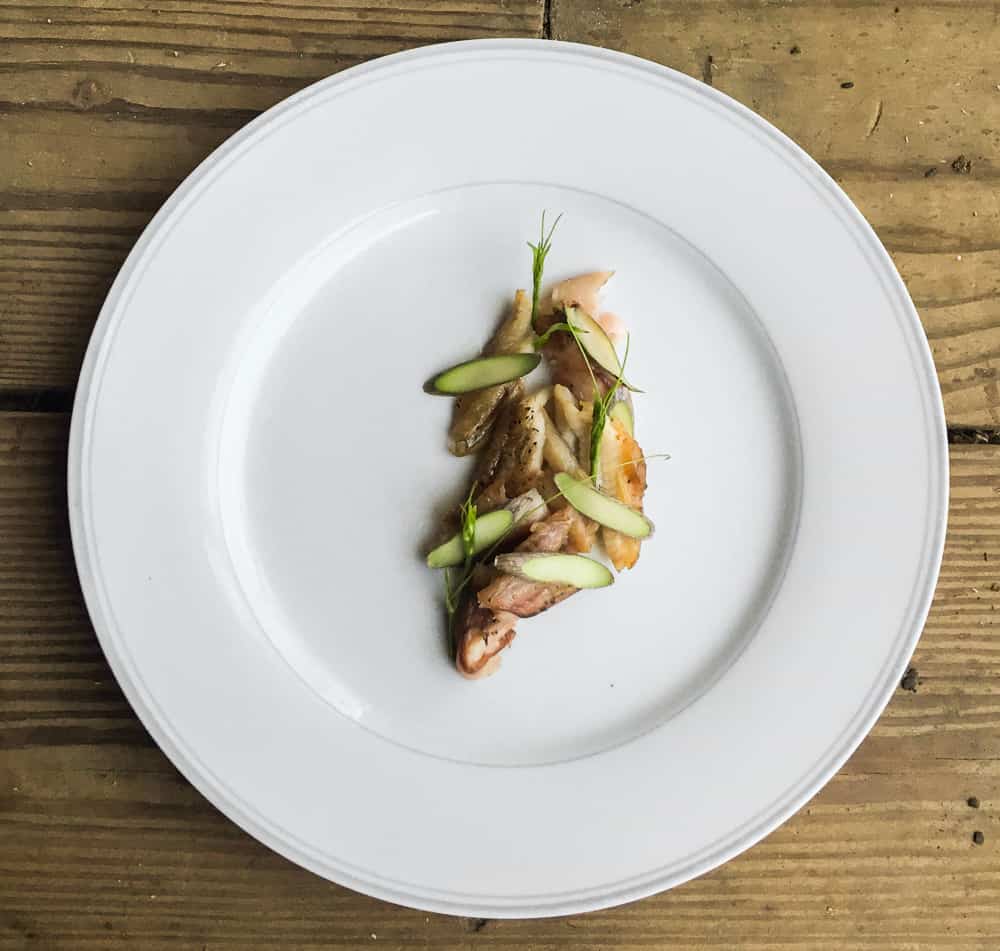 I didn't really expect shooting a two minute t.v. preview would be very hard work but I tell you what. I was bread and buttered kitchens, I know how to throw down and work hard. But If you're never tried to work in front of a camera, know that it's a different sort of draining, it's a mental, mind consuming sort of thing.

Two full days of shooting had me just as beat as two nasty days on the line. I was happy to come home after we finished up shooting for the sizzle reel, but even more happy that I got to meet Rambo. Until we meet again, Madison.