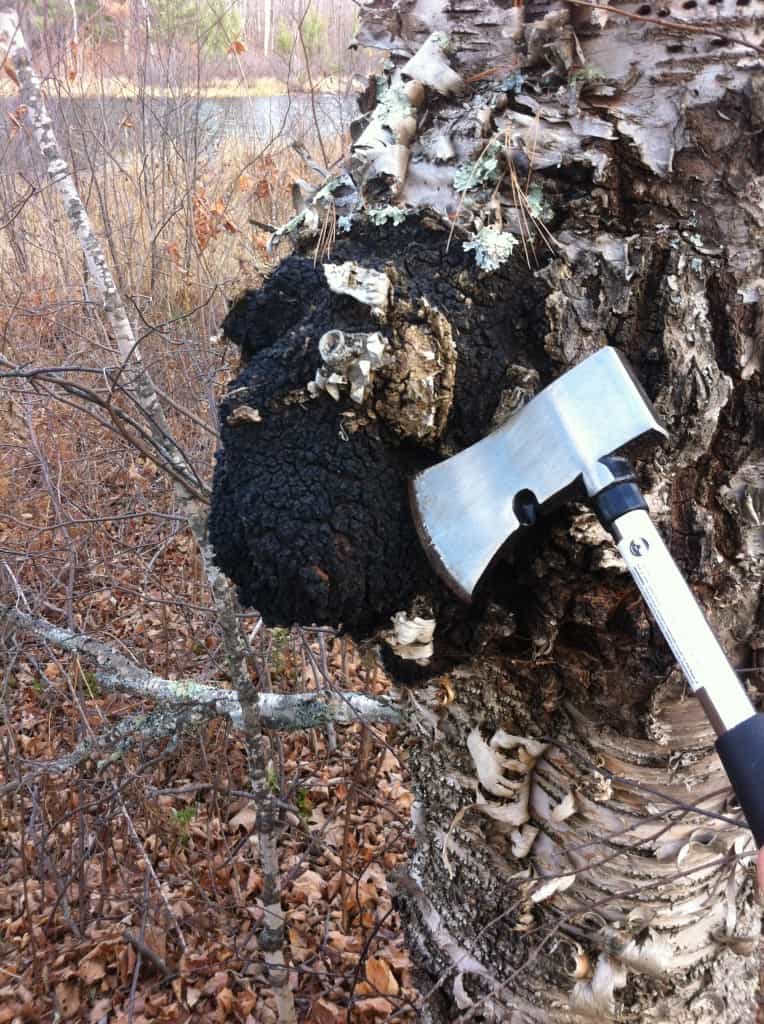 After researching mushrooms in my region for a while, I started hearing about something called chaga. After poking around online, I saw t referred to by names like “mushroom of immortality” “God’s gift” and “Holy Chaga”, which was enough to pique my interest. 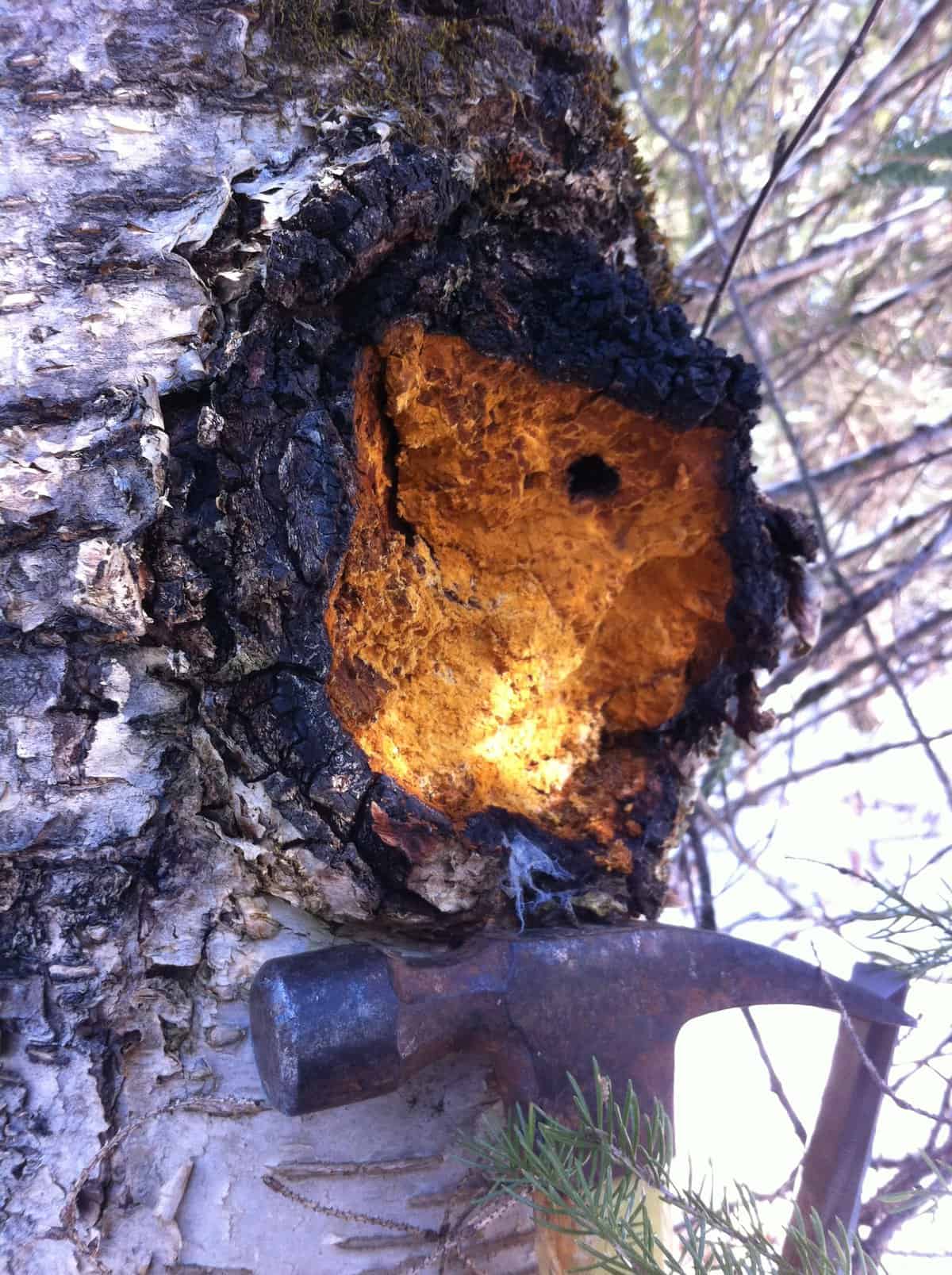 I had to find out for myself what it was, and was really intrigued. Chaga or latin Innonotus obliquus is not exactly a mushroom. It’s a sclerotia, kind of a growth or ball of mycelium, which is the organism that causes mushrooms to fruit, much as a tree is the cause of an apple. When I found my first one, I chopped it off of a birch tree and held it in my hands with delight and hollered: “It’s a TRUFFLE!”. Turns out its not exactly a truffle, but the patterns on the inside of both sclerotia have an uncanny resemblance.

Recently State parks in Minnesota explicitly outlawed chopping chaga off of trees, as well they should. Chaga grows slowly and can take a number of years to mature, so running around chopping it off every tree you can find is pretty selfish. A little goes a long way with this stuff, and I only go through about a few softball sized chaga chunks in an entire year myself and that’s if I remember to drink it. So my advice is to appreciate it’s beauty, take only what you need personally, and don’t be greedy.

What can you do with it?

This is up for debate a bit. Some believe Chaga, when made into tea will cure what ails you, is amazing, and a cure for cancer.

Chaga gives me something to look forward to in the winter occasionally and is a fun tradition Ive started with my friends. We all get bundled up when the snow comes, leave early in the morning, pack a lunch and a very large thermos of mulled wine, and set off to the unknowns of the northern birch forests, we call them “expeditions”. The tea, while I don’t think is going to cure any crazy diseases, is fun to make, and good for you.

Diabetics absolutely should not drink chaga tea as it disrupts their blood sugar levels.

Break the Chaga into pieces about the size of golf balls using a hammer and chisel. Allow them to dry/desicate at room temperature for about three or so days, the Chaga will crack a little bit as it dries, this will let you know that it is done drying. If you do not dry the Chaga out, (Also known as curing it-just like you would do with root vegetables, garlic, or potatoes) your Chaga will rot and make tea that tastes like liquid gymsocks, believe me, I have tried it. Alternatively, use a dehydrator, this will allow you to leave the Chaga in larger pieces if you like. This is also a faster method of drying it out, you can put the dehydrator on its lowest setting, it does not need any heat at all and dries out quickly on its own.

You can include the black outside portion of the Chaga too, or just the middle, it doesn’t matter. Its all Chaga and it will all make a Tea of similar qualities, although the black outside will give you a dark tea with red hues, and richer flavor. The light inside portion of the Chaga will give you a light tea with soft earthy tones, this is good to give to people who haven’t had it before as it is a slightly acquired taste, but deliciously so.

Take a piece of Chaga about the size of a walnut, place this in a quart of water and heat on the stove until boiling, then reduce heat to a slow simmer. After about ten minutes, the tea should have gained a nice color and aroma. Allow it to steep for another 20 minutes or so, then strain and drink at room temperature for the best aroma. (Its flavor blooms at room temp like red wine)

If you have used a piece of Chaga that contains the outer black portion, hold your finished tea up to some light, preferably in a staggeringly expensive crystal goblet, it should have a beautiful-beet red hue to it, indicative of a finely infused Chaga tea.

Break the Chaga into pieces about the size of walnuts or smaller if you can, place in a container, preferably glass, filling it half way full with Chaga. Now fill the container with vodka, any kind will do. Stir or shake the mixture once a day. It is ok for it to just sit in a cool dark place. In a couple weeks, the alcohol will have turned a deep red color and the tincture is infused. Now I like to take the Chaga out, cover it with water, and simmer until it makes a strong tea, about an hour, then remove the Chaga and reduce the tea about 10 times its volume. Add this tea reduction to the alcoholic mixture, now you have a double infusion. Take a teaspoon a day for medicinal purposes.