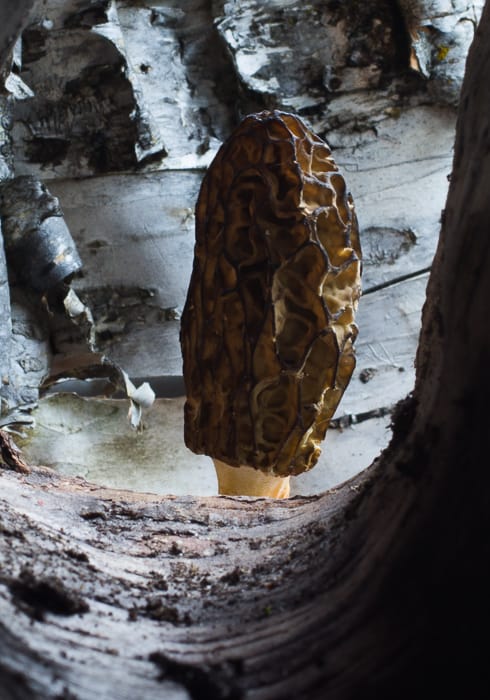 A couple months ago my friend Mike Kempenich told me he was working with Mathew Breuer of Northcountry Guides Service to plan a black morel foray and dinner in Northern Minnesota. He asked me if I would be a part of it and handle things on the culinary side. Cooking and mushroom hunting? Of course I was down. A bonus too was that I’d hunted plenty of morels in the Twin Cities, but never got the chance to pick true black morels. I was excited to have the chance not only hunt in some new territory and snag mushrooms I’d never seen in the wild, but also to create a menu for the celebratory post-hunt dinner.

We set up camp in Bemidji state park. Most people had tents, but lucky for my culinary assistant and I, (talented Twin Cities comedian Mike Rasmussen) our friend had snagged a camper cabin and was nice enough to let us bunk with him. Lots of state parks in Minnesota have camper cabins, and if you haven’t rented one, you should definitely try it sometime. I’m all for roughing it, but it was nice to have some amenities, since photograph hungry-mushroom hunting chefs need power outlets to charge things like cameras and equipment.

My job at the hootenanny was to be chief cook, and cook I did. Mike K and I decided It would be good to do breakfast each day and a bag lunch for the field, as well as the post-hunt dinner, which was to be the highlight. I didn’t really know much about the cooking accommodations, so I pretty much planned for the worst. 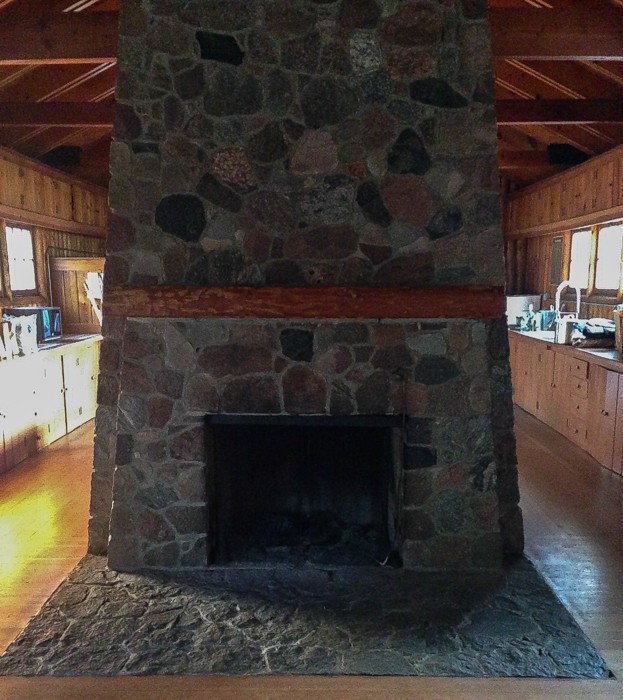 Fireplace in the mess hall.

Lucky enough there was a giant, beautiful mess hall with all the trimmings, the shining star being a gas range and oven. This was a far cry from my worst case scenario: I knew that If I had to I could cook the whole new york strips I brought tied on a string spinning over a campfire, (a method called a la ficelle in French). It was great to have a little firepower though.

Knowing there would likely be many hungry meat eaters on the trip, we started out the first day with a little breakfast I call the “barnyard frittata”. You take a bunch of braised meat like duck confit, pork and beef mix in some sauteed ramps and some fresh thyme, and throw it in the oven per egg bake, then cut it into slices. Alongside for a little sugary energy was some black walnut nutella. Afterwords, we set out on our first day’s foray. 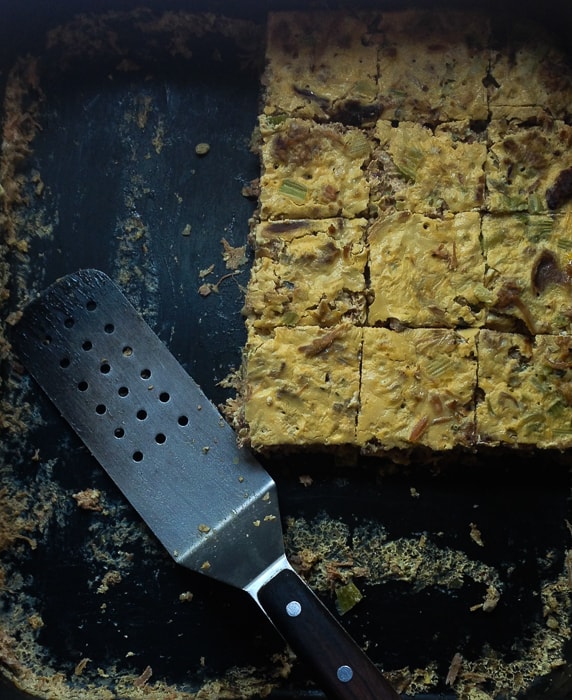 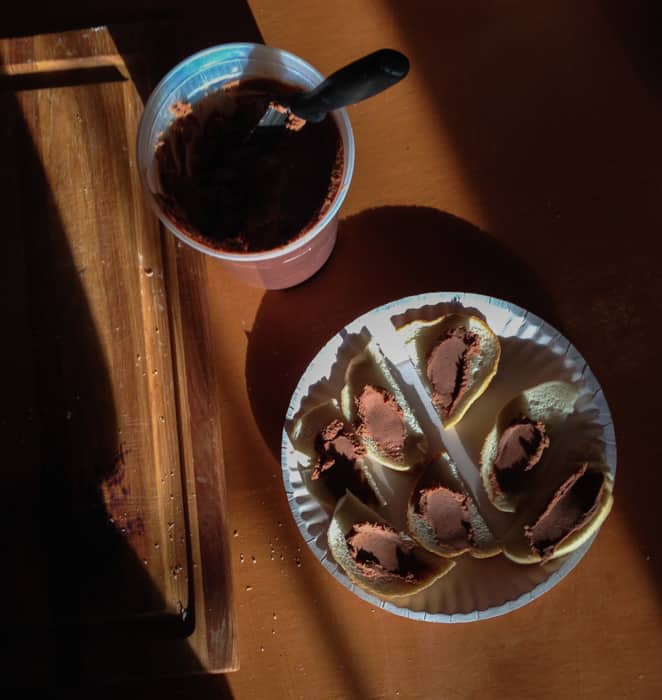 Everyone split into two groups, one going to aspen stands, the other in aspen clear-cuts which had been chopped down a few years back. I went with the group heading to the clear-cuts. I knew that disturbed areas can produce huge clusters of mushrooms, often much larger than you might see when hunting morels occurring from a single dead tree or two. My suspicions were right. 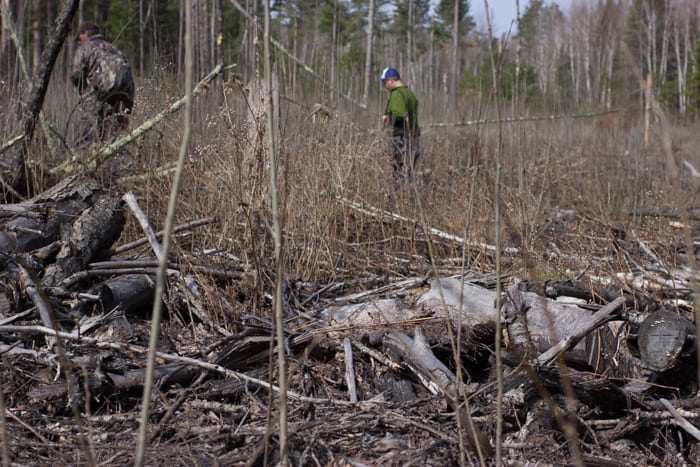 Mushroom hunters in the aspen clear-cut. 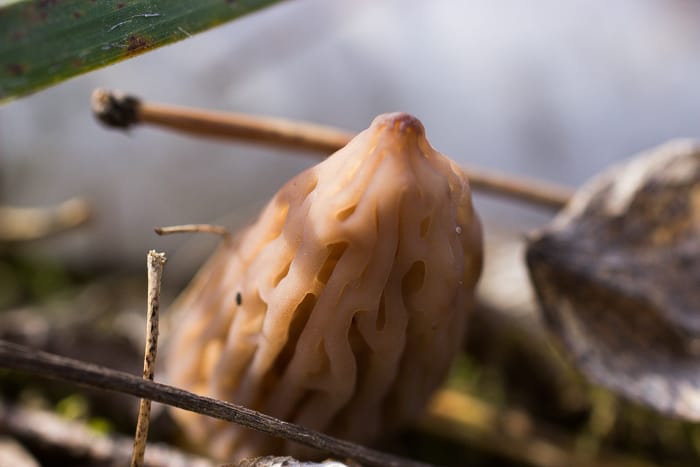 The first black morel I saw 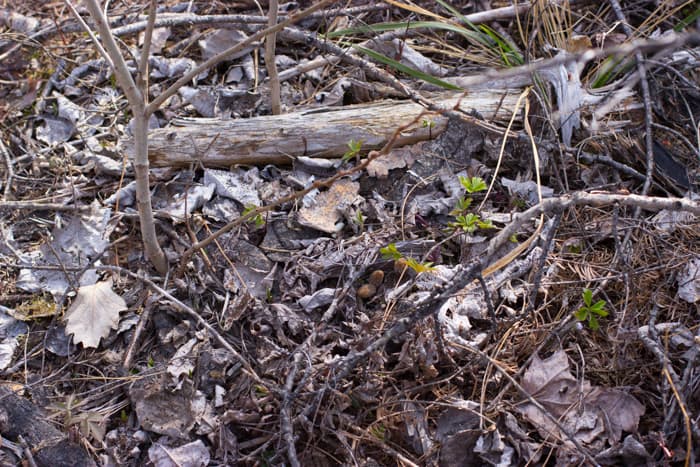 Where’s waldo? Can you spot the morels?

It was still early in the season, and the morels were just starting to poke up out of the ground. Coordinating a group outing for mushroom hunting is tricky. The challenging part is the fact that mother nature can throw you curve balls; you never really know what will happen. You could find two mushrooms, two hundred, or none at all. It’s all about timing. With the clear cut getting more sun due to the lack of forest canopy, the ground was warmer than in the woods, which meant many more mushrooms were to be found. We picked the clear cut with abandon, took some time to discuss  some gyromitra on the sides of the patch, then moved on. 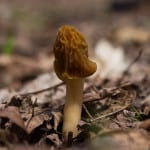 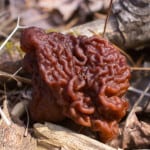 The next spots we went to were stands of aspen and birch, looking for the natural occurring morels. We stopped to show the guests some ramps, fiddleheads, and talked about the finer parts of harvesting them. Towards the end of the hunt we ran into a big patch of verpa bohemica, which made for a good field lesson as well. 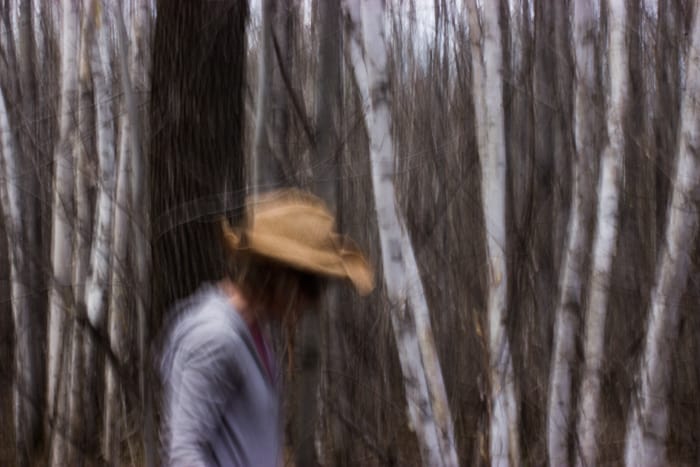 After hunting for a while, the white aspen can become a bit of a blur.

The hunting was fun, but I had to keep my eye on the clock, since I still had plenty of prep to do. I knew it would take at least an hour to compose a favorite showpiece of mine: an elaborate cheese and charcuterie platter served on a giant mirror. It’s a little cheesy, but everybody loves the mirror; a fun party technique I learned from a guy I used to work for from Milan.

Beginnings of the cheese and charcuterie platter for the morel dinner.

I wanted to make a menu that showcased morels, and would highlight different things that can be done with them, but there was a bit of an issue: morels had only been sighed in small quantities around the twin cities, and banking on finding a metric crap load of them 4 hours north would probably be a bit of wishful thinking.

I decided to hedge my bet and have a backup sauce made of dried morels for the main course, that way even if we didn’t find a darn thing, people could still get their morel fix. We found enough fresh morels to fry them up classic style, but planning to serve a morel based dinner for 30 people means you need a whole lot of morels. Needless to say it was good thing to supplement the menu with dried morels prepared in a sauce ahead of time. 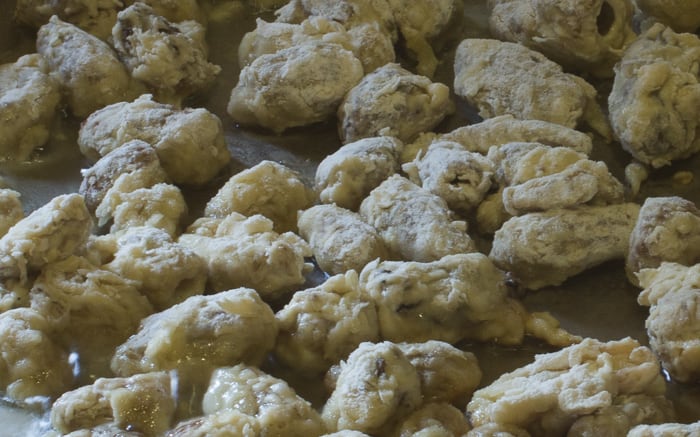 All in all it was a great trip. The mushroom hunting was good, being in the kitchen was great, but the best part for me was being able to connect with people. Mushrooming has the tendency to be a quiet, solitary pastime. To be able to talk and connect with other hunters from around Minnesota was really great.

I even received a couple gifts: one woman gave me two bottles of wine she had made, one infused with chanterelles, the other with black trumpets, on the condition that I taste them and give her my opinion. Another guy, a local from around the area, was really happy with the meal, so much so that he drove back to camp to get me a whole smoked whitefish to take home with me.

I’ve been given plenty of gifts, but there really is something epic about getting cured meat from someone, especially since people sometimes assume you’re a giant snob if you work in the culinary industry. It’s understandable too that gifting food to a cook can intimidate some people. Not this guy though, he was adamant I give his smoked fish try it; and I was a little touched. The fish was excellent.

After the dinner was done, I took off the whites, grabbed a needed beer and relaxed. Just as you might expect, post dinner conversation involved trading stories of epic mushroom hunts, mammoth hauls, and speculations about rare species. Probably the coolest thing I learned is that the cauliflower mushroom (sparassis crispa)grows in Minnesota; I had thought it a specialty of the Pacific Northwest. We kept on chatting into the night around the campfire, and I remember thinking to myself: “Yeah, this is pretty great”.

Anyone have other tips on picking black morels? Or have you picked them in other places in the Midwest? If so, shoot me a line, I’d love to hear about it.