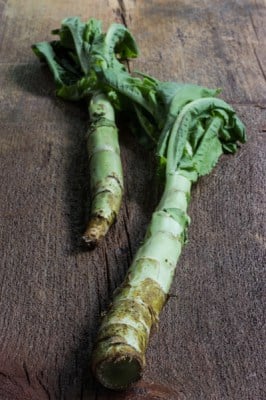 Celtuce. Kind of like if lettuce and a long root vegetable had a baby, with a beautiful, translucent, emerald color. I heard about it from a friend of mine one day when we had a snowday, he and I decided to meet up, geek out over some of his cook books, drink a couple beers and eat tacos.

One of the books he had was Michel Bras, a world famous, reclusive French chef. He, and his son’s Sebastien’s take on the cuisine of their region in Aubrac, France, at their 3 star Michelin star restaurant Bras, is held as some of the best in the world.

One of the dishes we got stuck on talking about was made with celtuce. I’d never even heard of it, but if it’s some sort of cool vegetable I’m unaware of, I’m interested, and I had to get my hands on some. A couple googles showed celtuce might be a type of Chinese lettuce, so I searched the local Asian markets for some.

At a local Asian market, I ended up finding something that looked like the celtuce that I saw in Bras’s book, and from the pictures I’d seen online. It was incredibly cheap, so brought some home, played around, and thought it was a little bland (I was bieng lazy). I forgot about the celtuce for a year or so, until I heard that a local farmer had grown some, so I gave it another shot and brought some into the restaurant.

When the celtuce came from the farmer, it looked different than the stem lettuce I cooked from the Asian market. The stem was larger, and much more difficult to peel. But, the size wasn’t the only difference, the flavor of the two were worlds apart.

Most resources say that you can eat celtuce raw, shaved in a salad or something similar. But, things got a little confusing there as the celtuce from the Asian market was mild raw, but even a small taste of the peeled, raw stem I got from the local farmer had me spitting it out as fast as I could-it was incredibly bitter, tannic and basically palate-killing, and that’s coming from a guy that eats bitter greens with impunity.

Stems and leaves are both edible.

I gave the peeled stems a quick poach in some seasoned vegetable broth, dried them off and fried the stalks in butter. The flavor was amazing. You might think that cooking a vegetable in liquid an then frying it would be counter-intuitive, but not so, after it’s been poached the flavor of the celtuce blooms, and comes alive.

After cooking for 10 or so minutes in the broth, the stem’s flavor was intense. It’s a little hard to describe, but imagine a root vegetable with a silky texture that tastes intensely of something along the lines of toasted nuts or sunflower seeds, it’s really special. That being said, the celtuce you find at a local store isn’t going to taste like the variety I got from the farmer, but I thought the flavor difference was fascinating, and, undocumented, from what I can tell. Here’s a recipe inspired by Michel Bras. 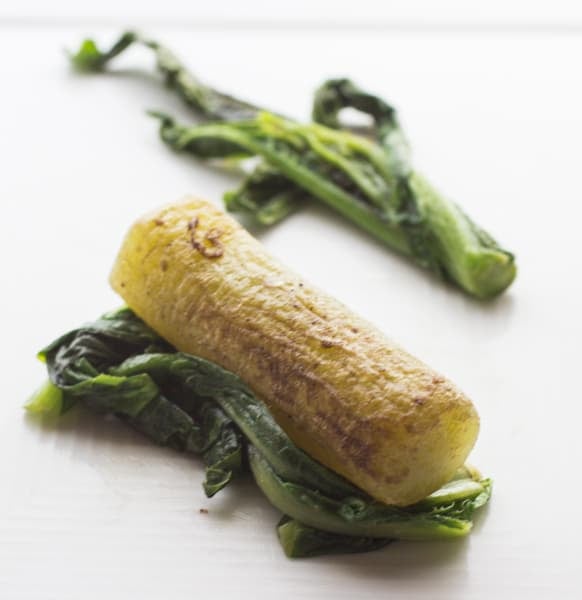 Celtuce, With Brown Butter And Lemon

Serves 2 as an appetizer, or as part of a larger meal