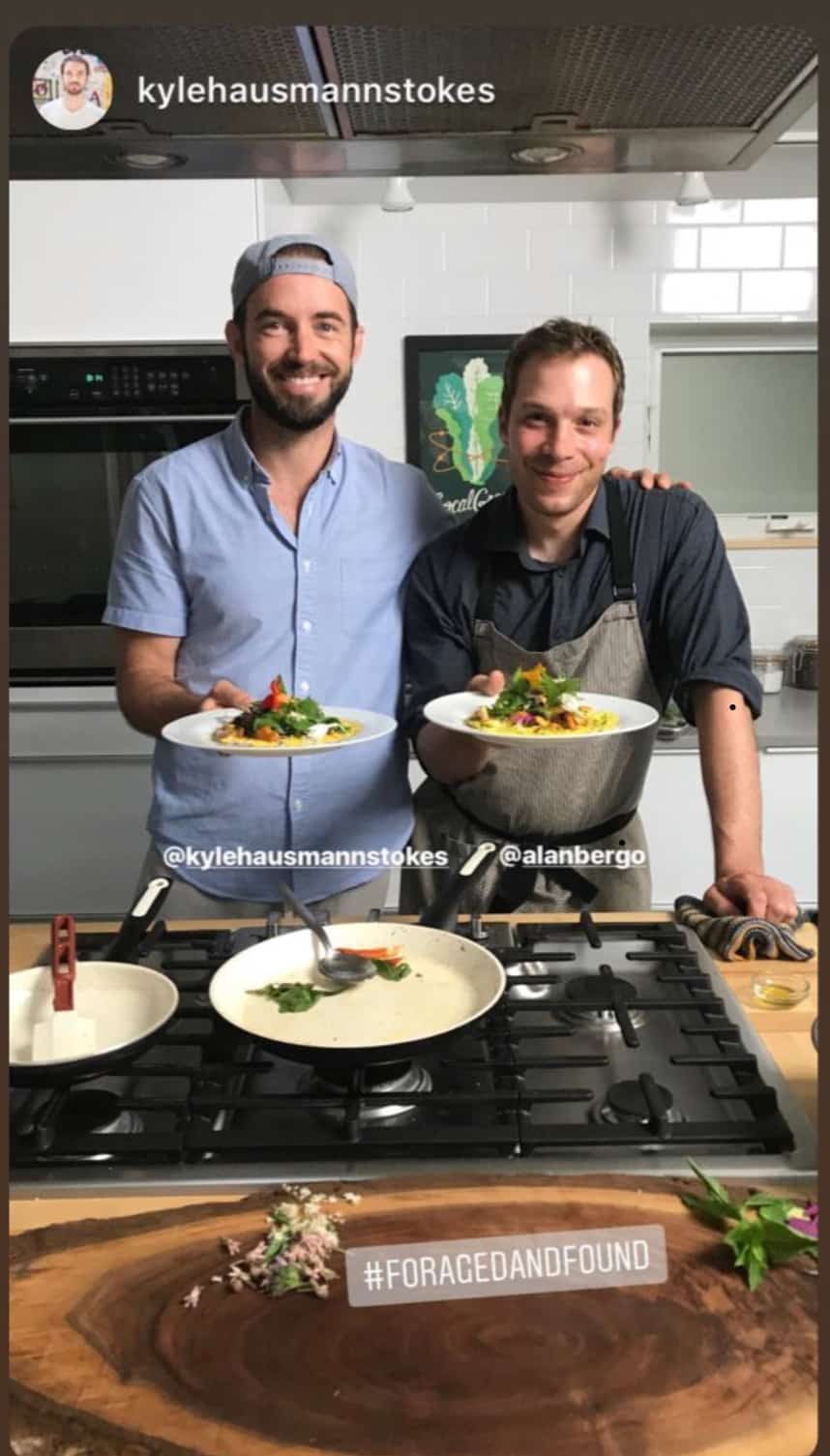 The director and I posing for the “martini shot” or end scene of a video.

Tastemade and REI just did a mini Chef’s Table-style documentary about my work. If you have any experience working with production or media companies in general, you know that things can get a little, interesting. As hired “talent” it can be difficult to balance the innevitable sacrifices you have to make with sharing your art with the benefits of exposure. I thought it would be fun to outline the process and work that goes into a couple minutes of screen time. 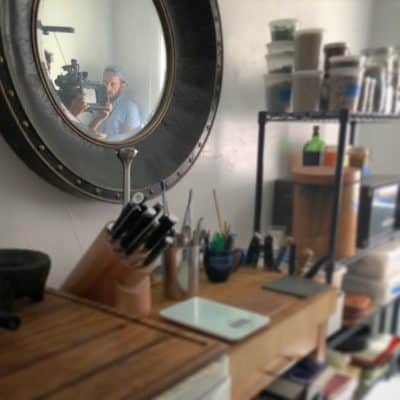 Getting some video of my dried mushroom stash. 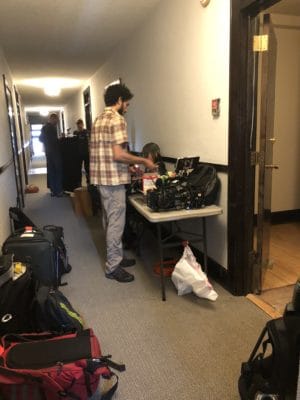 A lot of people camping out with equipment for a few hours in the hallway of my apartment. 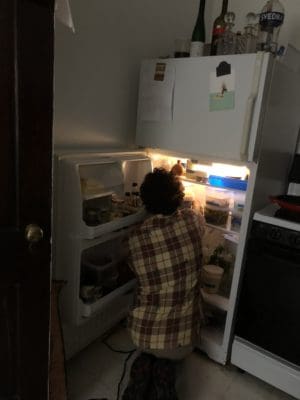 unplugging my fridge so they can install temporary LED lights to make it look like a portal.

The video series was called “Foraged + Found”, I was the only culinary talent of the 3 part series, along with a print and jewelry maker from North Carolina and Idaho. And if I do say so myself, my shoot was by far the most complicated. Shooting a quick snippet about cooking is really easy in comparison to what I do: to bring people into my world means trying to have nature cooperate, which is really hard when you consider that every season is different, every week, and every day is different from year to year.

Timing the Shoot, and Coordinating Harvests

One question that always looms when I do media projects around foraging is mushrooms, will there be any? They’re the prized ponies in the world of wild food, and for good reason: what’s difficult to find is more valuable. As much experience as I have though, I’m just a human, not some mushroom conjuring shaman. During the wild mushroom season in Minnesota, depending on the month, hunting can be relatively easy, or horribly difficult, the big factors being time of year, the rain and how they overlap. Unfortunately the camera crew was set to arrive during mid-June, which is a dead zone in between the spring morels and when the chanterelles start. There would be chicken of the woods here and there, but they pop up when they please, you can’t rely on chickens.

What a call sheet looks like, basically a schedule. But, youre always behind!

The Importance of Scouting

Thankfully, it wasn’t my first rodeo doing video work like this. I keep a journal I write in every time I go out, logging what I see, temps, rainfall, types of trees, and especially, dates and how much I pick. But, my journal said I’d never seen chanterelles before the 25th of June, a day before the crew arrived. Even if I had record of seeing chanterelles earlier, they would be puny, and people expect perfect, glorious mushrooms from a mushroom hunter. The producers and I were starting to get nervous there would be no mushrooms, and I told them it was a possibility. I also said I would absolutely not source anything that wouldn’t be growing at the time they were going to be shooting to keep things authentic.

Two weeks before the crew arrived I started scouting about every day. The mushroom gods were generous, and by some twist of fate, we started seeing chanterelles pins around the 15th of June, almost 10 days earlier than I’d ever seen them before in my life. The luck!

I ended up snagging a good chicken for the shoot, but it was pure luck, took a good six hours to harvest. Can you pick out where it is in the video?

The buttons were only at one patch though: the early patch that gets a lot of sun. It’s a known patch too, right in the middle of town and the warmest spots on the side of the trails poeple jog by regularly would also be the best bet for getting the media company what they wanted: footage of picking wild mushrooms. From the day I saw the buttons, I went back nearly every day, sometimes twice a day to cover up the side of the trails and baby chants with leaves to hide them from other pickers. I put the word out that the early spot was off limits to my friends, and let loose a couple new-to-them spots from my chest of secret gardens to tide them over.

Yes. That’s right. I was informed they wanted 40 different plants and mushrooms for the team to photograph during the final shoot. I get it, you’re talking to someone that works with a lot of wild things, surely they can easily harvest such a list for some great photos, right? Not exactly. It took three solid days of hunting 12 hours a day for me to produce that number of things and have them be photo quality, most of the time being spent in the car traveling to different places for this and that.

Getting organized was important, and I probably went overboard a bit. I started working on a google drive doc to keep track of my progress harvesting, and making a colored triangle code for things I’d already picked, and things I’d be picking the days of the shoot for the final photography on the last day.

It’s hard to show people some of the raw beauty in things I get to see. Putting something like a flower in a backpack immediately starts a deterioration process, especially if it’s picked in the heat of the day. Mushrooms get packed in individual tupperwares so they don’t bruise, everything delicate had to be in it’s own hard-sided plastic container. Organizing and labeling kept me up until the wee hours the nights before the scout day, and I had to store everything in a nearby restaurant kitchen in two separate coolers since space was getting out of control in my apartment. I had a sneaking suspicion though, and I was right: only about 10 of the 40 things I picked made it into the final cut. Imagine how happy I was with that! 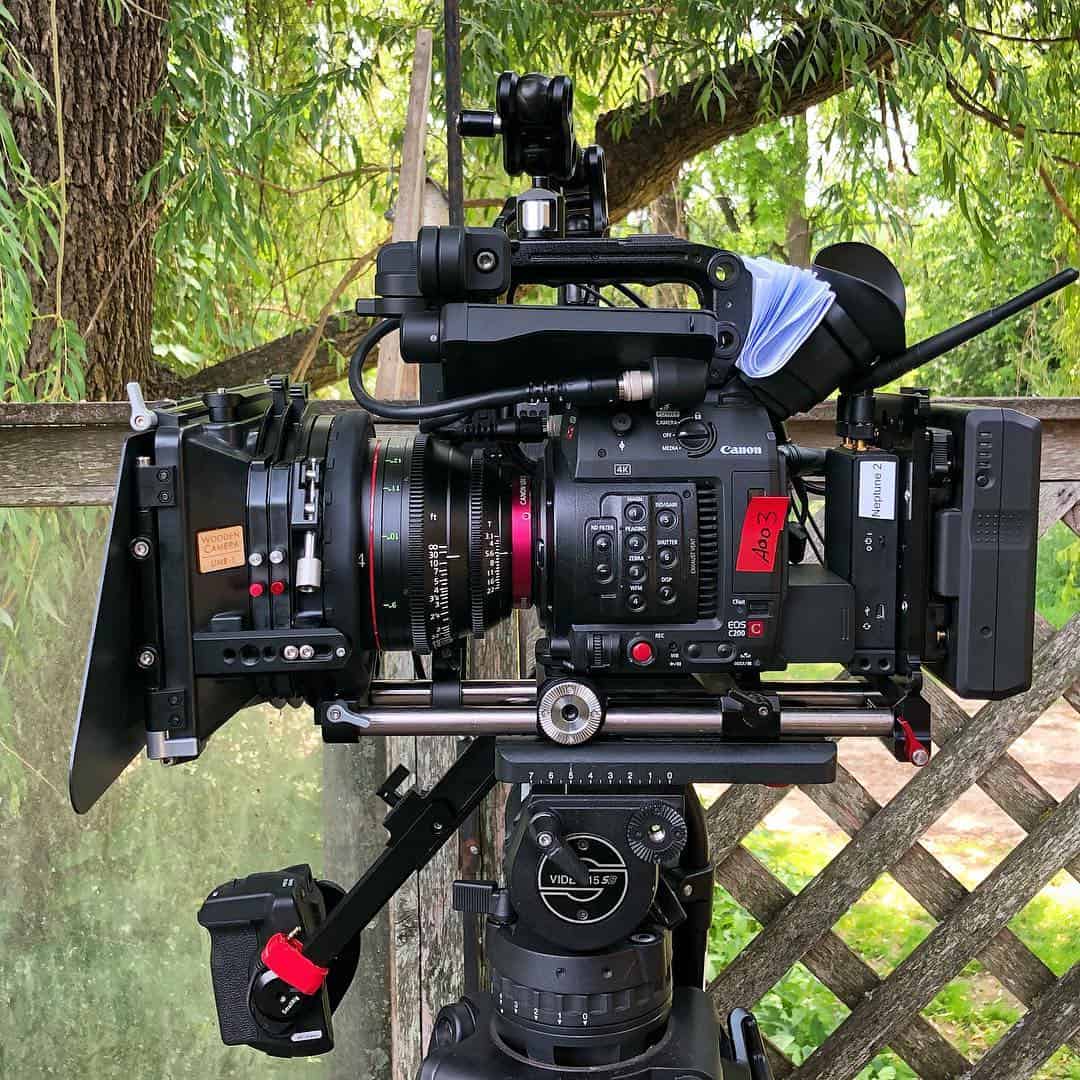 The crew came strapped with some serious hardware. Kind of looks like a space weapon.

The Stress of the Camera

At first glance you might think getting filmed is an easy way to get a check, but that couldn’t be farther from the truth. Staring into the black, life-less eyeof the camera sucks a certain type of energy from you, it’s a strong, psychological oppressive sort of pressure. It’s best to not have a script for a natural feel, but my brian gets mushy after a while: I forget words, mispronounce them (see below), and having to do multiple, tedious takes of every single thing can get confusing and feel like groundhog’s day.

As a talent, I sign away my rights to own anything the company produces using my likeness, along with a lot of other legal gobbledyguk. It is what it is, but with foraging having the learning curve it does, it probably would’ve been good to have me in touch with people and reviewing versions of the short before going live. I really tried to stress the importance of studying your Latin binomials, and it eventually turned into me annunciating a bunch of Latin names back to back, and I screwed one up (milkweed). Unfortunately it got picked out from a bunch of others and is at the beginning of the episode, and could’ve been fixed with a simple tweak.

Hearing me butcher the latin name of milkweed is a little like nails on a chalkboard, but to err is human, I guess, and at least the idea of studying and research really comes through, the director Kyle Stokes is a great guy, and really talented director. Enjoy the show.