I had a really fun experience a while back. Every year the Minneapolis Institute of Art comes in for a dinner, and it’s a special one. Usually for private dining parties and chef’s tables we will compose individual menus according to the season and what is on hand, taking into account various diet restrictions, allergies and what have you.

The menu for the art dinner is always a little different in that instead of us planning the menu according to seasonal produce and whatever we can get from the local farmers, each of the five courses for the meal is based on a painting. As if that wasn’t cool enough, each of the paintings are from local artists from Minnesota. Boss handed us a bunch of prints at our daily menu meeting, and informed us of the date of the party. We sat around and chit chatted for a while about them, trading ideas back and forth and brainstorming. We wouldn’t know exactly what we could do yet, since we needed to show the paintings to the pastry team who works in the morning, but we got a couple ideas. Here are the paintings we were given this year:

It was the absolute dead of winter, and we had many root vegetables. The guy in the painting isn’t looking too rich, so I decided a peasant themed winter soup was in order: I made a ribollita out of root vegetables, where stale bread is added at the end. The bread chunks soak up the broth and become like little dumplings, its great. This was the first course. 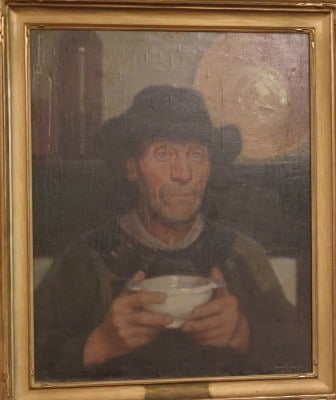 Men in a cranberry field 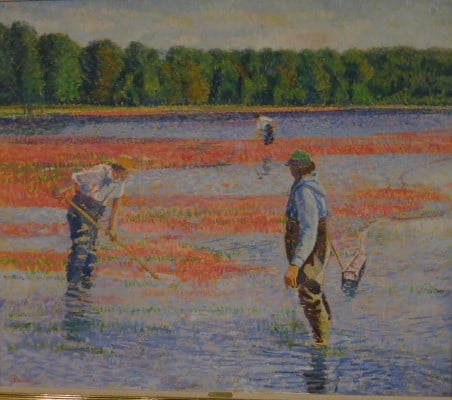 This painting was fun in that we noticed the various hues of red and pink, this made us envision the pink flesh of a salmonoid fish, in this case, steelhead trout. The red peppers in the picture became a red pepper vinaigrette. 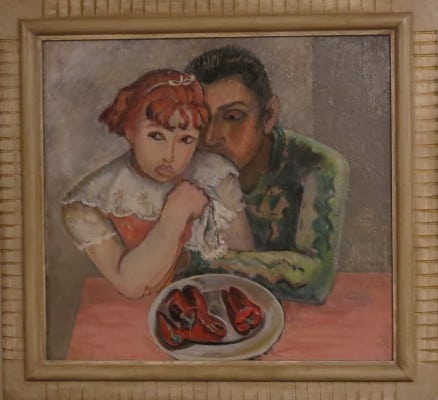 For the bowl of grapes we used a bit of poetic license. We needed to create an additional meat entree, when we looked at the grapes and the leaves in the picture we saw kale with a sauce made from grape juice and meat glace, a garnish for roast beef. 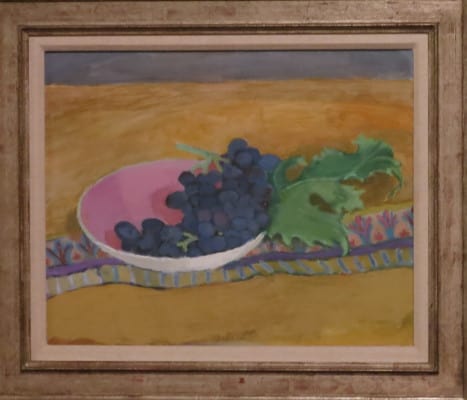 Goats eating under a tree

This is the painting that the pastry department snatched up, it became a delicious goat-cheese cake. 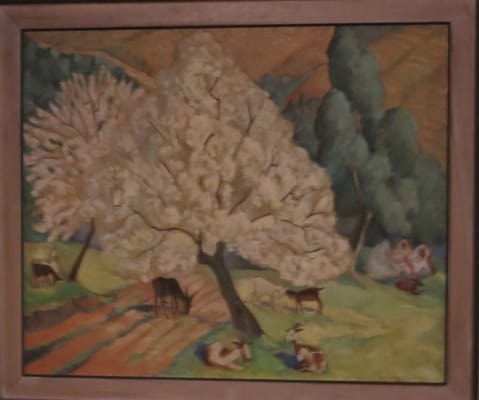 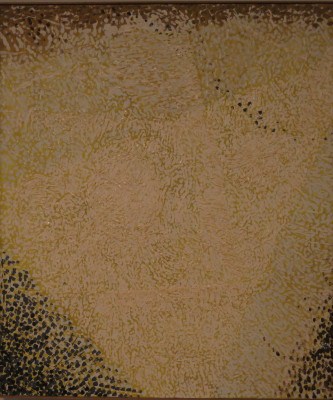 This one is my favorite, and the one I will give you the simple recipe for. All of the other paintings were pretty straight forward. The others all had food in them, which made it pretty easy to create something representative of each one. This painting though, was very different. We looked at it and kind of scratched our heads. It was abstract, not having form and shape like the other works of art. There were these black dots on the side, and an inside that was a creamy brown. There were varying hues of cream and white, it looks ethereal, formless. How the heck are we going to make a dish from this? I thought. Boss said the black dots were pepper, and we all agreed.  The brown sauce naturally said walnut to me, so we went with that too. It’s about now that we remembered we still needed a vegetarian entree, so gnocchi it was, since I can make enough to feed a party of one hundred people in about 2 hours.

This one is also the only painting which I can recall the name of the artist, who is a little unknown, but made some very interesting work. John (Jack) Cushing-Wright was born in St. Paul Minnesota in 1919, he went to art school in the twin cities, eventually moving with his wife and children down to Mexico, which seems to have influenced his later work a bit (see more of his work here). After studying his painting for a couple weeks, I began to get little enamored with him, and started looking up all the info I could find on the guy. After doing a little armchair research, I began to develop an interest in his his pieces.

Abstract stuff never really spoke to me that much, but this guy is so cool. You see, Jack Wright’s paintings were influenced by his subconscious. He would see things in dreams: colors, patterns, and then put them through his artistic filter, creating very unique pieces. Every piece is unique, yet they still have the same dreamy, abstract style, like art from another dimension. I’ve mentioned it once or twice that I have had similar experiences with cooking. Thinking about food and working with it all day means that you may sometimes dream of  it, just like anything else. I have had visions of dishes during the night, then woken up scurrying, tearing the room apart like an animal looking for a pen in order to catch those inspirations before they float out of my head. Sometimes I catch them, sometimes I don’t. The times I do get them down, I make try to make a point of putting them on the menu.

So in the end, this isn’t a recipe that you will want to sit down and eat as a whole entree, since it’s very rich. Its an appetizer. It’s not all about the recipe either, more of an idea I would say. People often say that food is art, but this time, the art became food. I think Jack Wright would think it’s pretty cool. Now I’m off to bed, maybe I’ll see a snack tonight.

Serves 4 as an appetizer Ingredients 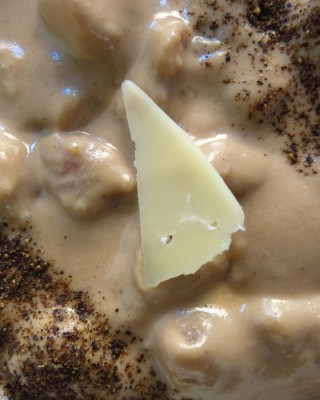