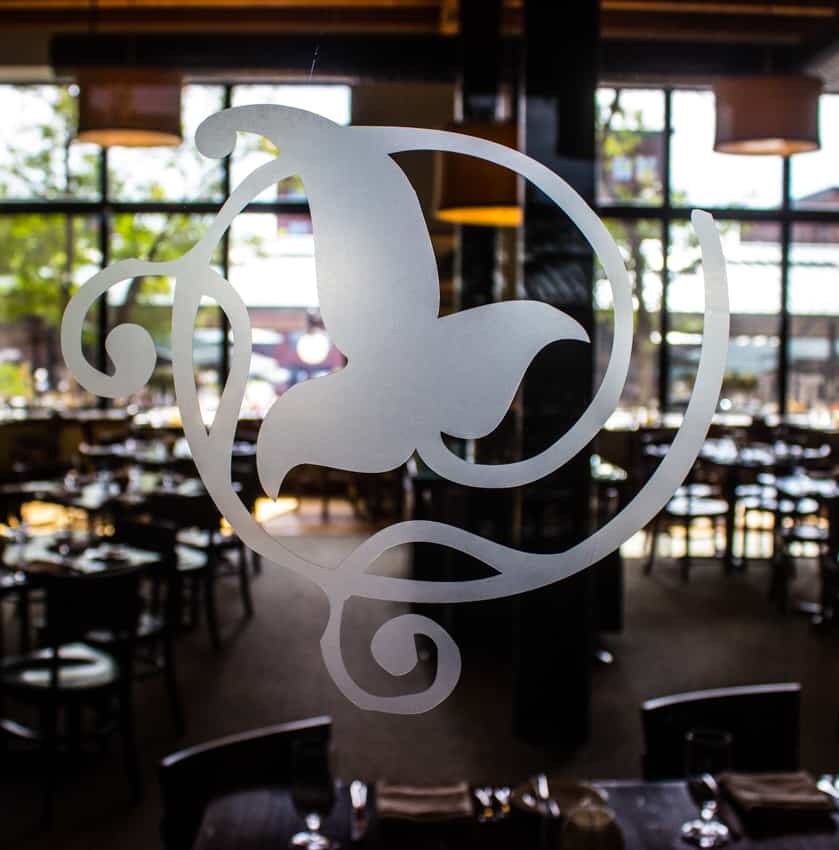 For the past four and a half years, I’ve been working at an amazing restaurant, under the most respected chef I’ve ever known; a man who changed not only how I think about food, but my life: Lenny Russo. His restaurant, Heartland, is a place that transcends what normal restaurants aspire to be.

I first heard about Heartland and its daily-changing menu (the first of its kind in Minnesota) about seven years ago. Back then, working at a place like that was just a dream. It stayed a dream until I worked with chef Andy Lilja, who introduced me to Lenny.

If you’re not familiar with Heartland, I’ll explain the concept briefly. The menu is sourced from ingredients located within a 300-mile radius of Minnesota. This means no salt water fish, mussels, clams, citrus, imported olive oil, dried pasta. On top of the sourcing theme, as I mentioned, the menu also changes every day. 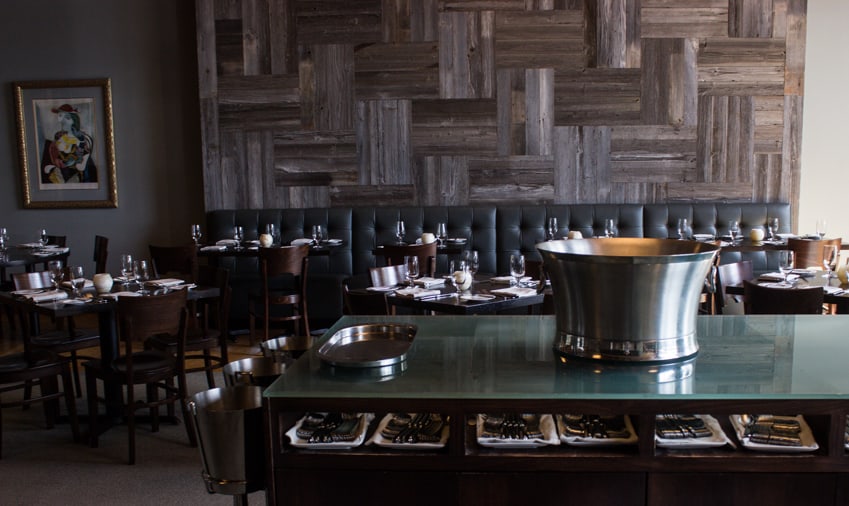 The dining room has a beautiful wood backdrop.

The menu is the heart of Heartland, and we would try to not repeat a single ingredient in the entire thing, although something might sneak in twice if it was in season.

The menu is a collaborative process. When you come in as a cook, the first thing you do is look over your menu and see what ingredients are low, or if there are holes in the menu that need to be filled. Maybe you need a new sauce here, a new vegetable there. Maybe a protein is changing. Beef roast becomes goat becomes lamb becomes boar.

Everything is moving, changing, and when a different person works your station for a day, they’ll make their own prep, and put their touch and style on things. If you were running a cherry vinaigrette with your salad and it’s getting low, maybe they make an apple vinaigrette, to put in its place. It’s a beautiful, organic dance, and it changed the way I think about food, and how the menu of a restaurant is created. 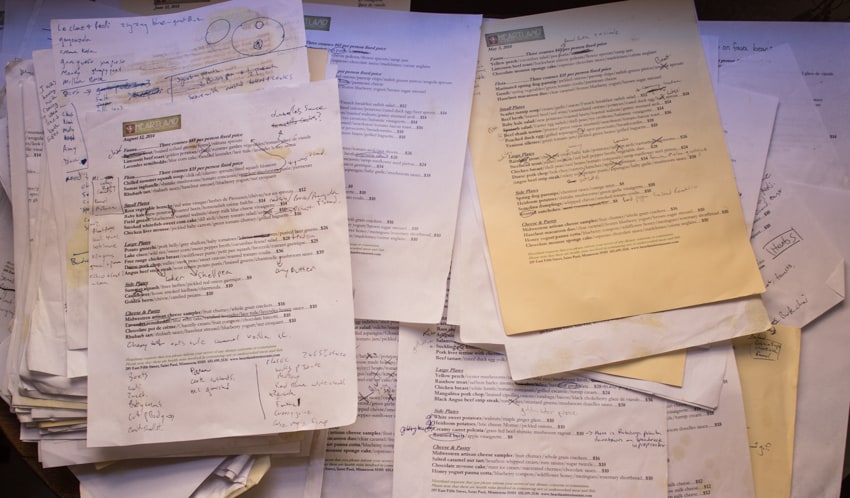 A couple years of good inspiration

At about 4 p.m. each day, we have the menu meeting. We all sit down with the boss and discuss proposed changes to the evening’s selections. It’s cool how it works, but can be stressful, since you have to leave the kitchen for 30-45 minutes, and those minutes are valuable prep time, especially on the weekend.

Boss is the filter and focus for the creativity of the line, and at the end of the day, he creates the menu. This means that if you’re making something that doesn’t sound right, you’ll have to start all over, and you’ll probably hear about it for a while too. You learn Lenny’s style of cooking fast, or you won’t survive.

Heartland is demanding. I made a point of bringing menus home to study them after work, in order to plan for the next day. I tried to get to work at least two hours early as well, to give me plenty of time to prep.

After my promotion to sous chef, I had even more on my plate, and the job began to consume my life. It didn’t matter though. The freedom to create almost whatever you want is indescribably seductive for a cook. Not only did I get to work with obscure, funky things I’d never even heard of, but I essentially got the freedom to teach myself and experiment. I referred to the kitchen as “The Sandbox,” and it still is. 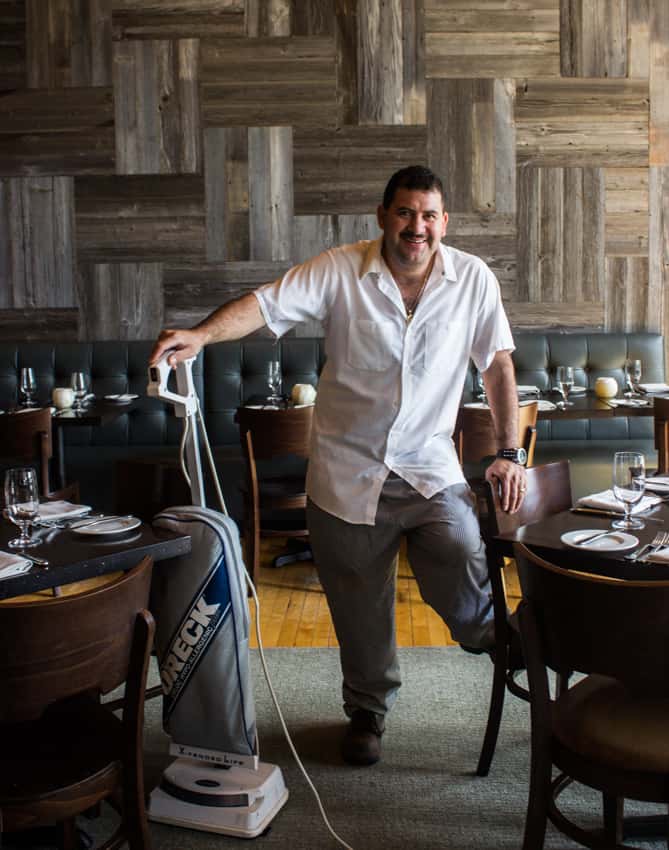 Salvadore is a professional dishwasher. He insisted on posing.

Life has this way of changing, though. This past summer, Lenny presented me with an opportunity, the biggest one of my life: becoming the executive chef of a brand new restaurant and helping to build it from the ground up.

At first I was skeptical. I mean, me? Could I do it?

One of the best pieces of advice I got was from my longtime friend, mushroom-hunting partner, and coworker Brandon, now sous chef at Heartland. When I told him about my trepidation he said:

“Alan, you’re a Heartland sous chef, what the f*** did you think your next move was going to be?!”

I knew he was right, and I accepted the offer. I gave a month’s notice at Heartland, and the days flew by. I taught people how to do things on my station so that they could operate without me. I said goodbye to people I’d grown close to in the kitchen, and it was hard.

It felt strange leaving the place where I’d worked longer than anywhere in my life. I was energized, sad, happy, and scared all at the same time. But something exciting was brewing, I could feel it in my bones.

Now some of the most important months of my life are approaching. I’m not working in a kitchen right now, but I’m working harder than I ever have before. It’s more cerebral, intense, important. I’m in a sort of purgatory, a place in between the conceptualization of a new restaurant and its grand opening. Wish me luck.